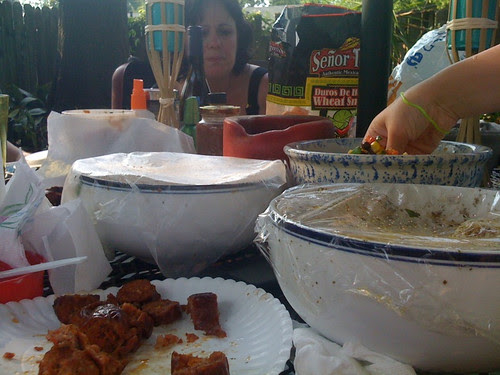 My friend Jill behind the food around the pool at her house. A nearly identical scene is the subject of my recent Oxford American story. The sausage at the front is from this place.

Media Announcement: My interview with Colin Hay from Men At Work is in the current issue of 225. He's appearing at the Manship Theatre on July 9, 2010.

I very much appreciate having both a bookstore and a massive academic library within walking distance from my office. The pleasures of each are more complimentary than conflicting, for instance, I would not have cleared my head with a fat parade of a book stuffed with 45's covers arranged by a compelling design logic were it bound up in dullsville library binding, yet would likely not have spent a moment reading R. Buckminster Fuller's giant scientific poems if a bookstore ever carried them. Amazon merely inspires linkage.

Song of the Dead
And the Quick---
Newton was a noun
And Einstein is a verb,
Einstein's norm makes Newton's norm
INSTANT UNIVERSE,
Absurd.
"A body persists
In a state of rest
Or ---
Except as affected---"
Thus grave stones are erected!