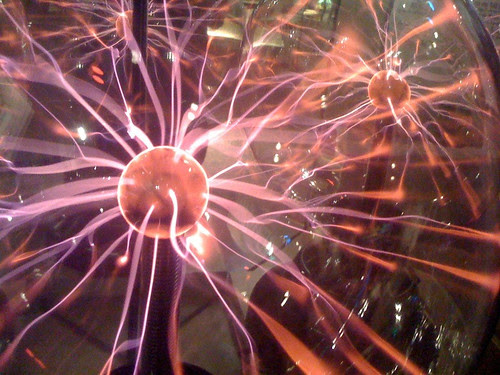 The plasma ball and mirror at the science museum, or possibly lasers that are actually spiders gettin' you.

Been finishing off Joe Bonomo's Highway to Hell this week in the mortar cracks and it made me listen to Electric with a single mention toward the end. I couldn't accept this album at the time - I was too enthralled with the tether between goth dour and Lizard King shtick that was Love to take my new favorite band being just a rock band. But this album holds its own. C'mon, lil' devil...

I always have loved old knucklehead AC/DC and likely always will. My theory on why Back in Black is one of the best perennially selling albums in history is not because of its inherent greatness (though it is pretty great) but because the dudes of this world find themselves wandering into mall record stores to escape the din of shopping and start flipping through the A's and there lies that smoldering black artifact of simpler times waiting for them and instead of sorting through the abecedary of the past that is the Rock/Pop section, they just buy it, listen to it on the way home from the mall and then let it slip under the seat where nostalgia always winds up.

If the band had been called DC/AC, no mortal man would ever get that far in the time allotted. Aerosmith has probably done pretty well over there just on their proximity in the stack.

That said, Highway to Hell > Back in Black

The all time best treatise on AC/DC and big concert rock 'n' roll and everything lies below.