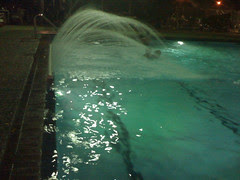 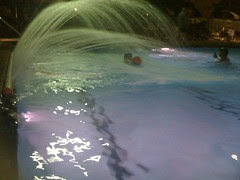 The lights in the pool change colors at night.

Broken Social Scene would come to your photography show at the coffee shop; The Sea & Cake might pop in if it was at a proper gallery; Kid Congo Powers would wear a suit outside the bar across the street that would be better than the art at either. I interviewed Kid twice for outsideleft in 2006 (here and here) and played that Philosophy & Underwear CD so many times that my then 5-year-old would request and shout along with "Black Bag" in the car. This one is good too.

Over lunch, I reread the part in John Fante's The Road to Los Angeles where Arturo Bandini kills crabs on the beach and was reminded that its one of the greatest scenes in all literature. I was about to say "F a bunch of Catcher in the Rye, somebody start making Arturo Bandini movies" when an image search informed me they made one of Ask the Dust with Colin Ferrell as my hero and Salma Hayek as his beloved waitress so instead I'll just ask that they stop making movies out of anything but comic books. All apologies to comic book fans who know my pain and if need be, they can just stop making movies altogether.
Posted by Alex V Cook at 6/28/2010 12:53:00 PM