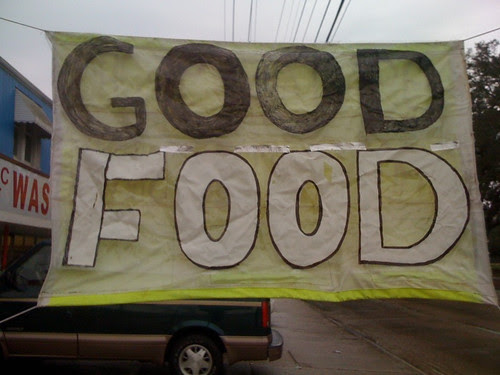 When I get around to writing a book about food, I'll use the above banner stretched (like the claim) across the parking lot of Avo's for the cover. I really wanted to get a picture of the guy who dresses up like the Statue of Liberty, enthusiastically trying to wave traffic into the tax place across the street - they beep at him all day - but he was huddled under an awning from the rain taking a smoke break. There is some poetry in the Statue of Liberty on a smoke break, but not like when he/she is fully engaged in his/her higher purpose.

Some learned friends are helping me with my Nilssonification, so the sandwiches were made to King Bathrobe's Beatles tributes/parodies on his bananafish-grade crazy first two albums. They are superb company while navigating the absurdity of another work week. I like this review by Stephen Thomas Erlewine of the curious combination of these two albums into one:

What is hubris? It is Aerial Pandemonium Ballet, a folly Harry Nilsson crafted after winning a Grammy for "Everybody's Talkin'." Riding upon the goodwill generated by the award, he decided to compress and edit his first two (quite brilliant) albums into one record.

I love the spirit of a grandiose, dubious decision. Bite that hand once it gets comfortable feeding you. You know that fat hand meat is gonna taste so sweet. Here is Schmilsson's alternate version of his already alternately versioned Beatles medley. Beep beep, beep beep, yeah!