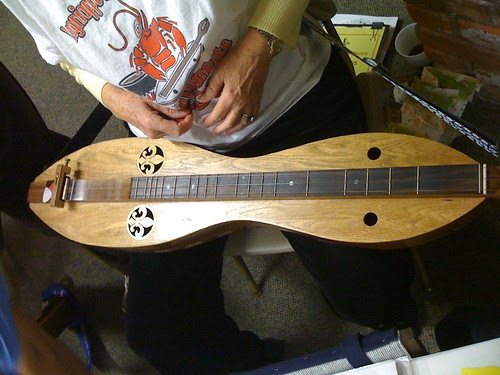 The Zinnias - Sand Dollar (via Mystic Signifier via P4K)

The pre-69 Love Songs Magnetic Fields don't really do it for me, but this muddy cassette from Stephin Merritt's pre-Magnetic band the Zinnias does it plenty. It has a fire pure as that from shoplifted lighter. Thanks, Mystic Signifier!

My review of Gil Scott-Heron's latest record I'm New Here is up at outsideleft. Among the bon mots packing the review I call the elder poet "A snake charmer with a cobra fed on a diet of a desperation, insight and hope."

Also appearing on the Internet is a Country Roads (in the March 2010 issue) story I wrote about mountain dulcimers and the people that play them and the festivals they have so that the people that play them may gather in surprisingly large numbers and play them. Like at this one across the river in Port Allen this March. The above photo was taken at one of the Lagniappe Dulcimer Society practices. I'm not positive, but I believe that might be the woman that sighed, "Let's do 'Spanish Fandango.'"
Posted by Alex V Cook at 2/26/2010 03:42:00 PM