profiting by the black methods of promotion 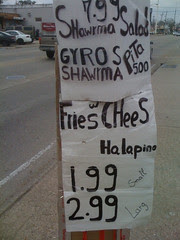 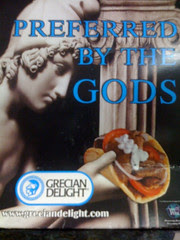 I don't know about your town but mine is lousy with shawarma and hummus joints. I'm not sure why; there is not a significant Mediterranean population here. Maybe we are just in tune with eating meal cut from a half-cooked, sketchy looking spinning log. My favorite is the upscale-ish Albasha's over by the Barnes & Nobles. We are also in tune with saying things like "the Barnes & Nobles" even though there are two of them here. It lend a place a certain mystic aura by calling it "the" whatever. Anyway, the image on the left is the sign in front of the one I pass on my walk home, where "good food" is also proclaimed to reside; the right is the table tent at the one right across from my office. I would recommend neither as a place to eat, but both are tight with the powers of totemic language.

Speaking of, John Williams at The Second Pass wrote of the inadvertent poetry that arises from spambot comments on his blog, which has been something I have been observing as well. Yesterday, I got this:

Yes indeed, in some moments I can phrase that I jibe consent to with you, but you may be inasmuch as other options.
to the article there is still a without question as you did in the fall delivery of this beg [link removed]
I noticed the catch-phrase you suffer with not used. Or you profit by the black methods of promotion of the resource. I possess a week and do necheg

I like the ring of profiting by the black methods of promotion. It makes me sound like a cackling alchemist cooking up power spells in my metaphysical oven.

I will try to do better removing nefarious comments. I was asked to clean out the pileup of Japanese porn spam that had accumulated in the comments section of my "Origins of Who Dat?" post from this blog which I cited in this week's Record Crate (my 225 blog) post, in which I muse upon the role of signs, the black methods of marketing, and the possible greater significance of the Saints recent Super Bowl victory. By linking to it here, I am creating circular meta-metaphysical convection heat in my alchemist's oven. Maybe I need one more "meta" for talking about it. Black methods of promotion indeed!

One of my favorite things is a Taschen book of alchemist drawings my wife got me in our early days of courting. It speaks of the black putrescence of a body as being one of the more meaningful transfers of matter, the one that contains the secrets of the meta-physical. I'm not sure I follow any of it, or even if it is followable by a modern mind, but the images make my head spin with "YES! YES!" This is the value of signs, the kind of poem-logic preferred by the gods, even more that some dodgy gyro sandwich or your finest halapinos. 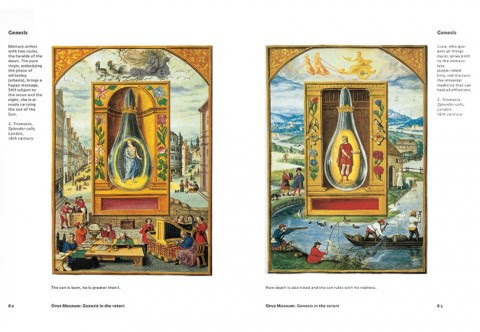 Anyway, this Tony Allen record is the bomb. Thank the gods and the black methods of promotion for hearing my pleas and delivering it unto me.
Posted by Alex V Cook at 2/11/2010 10:40:00 AM