Now I feel I should smash a donut 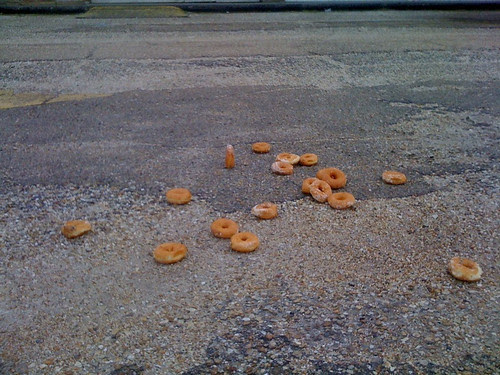 These donuts scattered across a parking lot were the second weird thing I almost stepped on during my walk home from the bus yesterday evening. The first was a freshly dead pigeon, laying on its side in the grass. I'm not sure which would have been more distressing. Feeling the crunch of bird bones beneath your feet should send up a shudder in anyone, but the squish and grind of a donut into concrete... I don't know.

There might be some singular poetry in such an action, the kind of territory only performance artists dare to tread. A friend who lived in NYC in the early 80's when the island was wild with transgression told me she and a performance artist friend would do things like take a bite of any apple found on the sidewalk or a swig from a beer left on top of a newspaper box, literally ingest the city. "The street provides," was their motto. She accompanied him once to a performance at some arts college where he ground up fresh flowers between two bricks. Even now I can hear that crumbly, scraping sound...

Now I feel I should smash a donut in a parking lot, so that experience can be sent out into the world. Maybe if the birds haven't eaten them all by the time I head home. Maybe it will feel like this:

I dunno how I feel about Joanna Newsom. I want to like this stuff more than I do, which is troubling because I want to like it very much. My opinion of it was unfairly clouded by this NPR concert by Colombian harp player Edmar Castaneda, whose warp on Latin jazz through his instrument is perhaps what it felt like when Zeus impregnated Danaë in the form of golden rain. Better than smashing donuts, to be sure.