Had I not had the pleasure of making Scottsboro, Alabama painter Clyde Broadway's acquaintance this morning at the usual coffee place through the usual people, I might have shrugged "naive" at this painting, but of course, that shrug, like all shrugs, would have been a cop-out. There is no such thing as a naive artist. There might be ones who don't have a total jargonesque chokehold on their muse, or ones use the canvas as a trap to catch what is in the breeze (though I tend to not believe them when they say that's what they are doing) but I've never met one that didn't know exactly what they were doing when they do it.

Clyde explained that these riverboats are at the precipice of the Millennium (more opaquely so in "Leviathan"), a breach in time as arbitrary as one drawn on the surface of a river. The boat in "The Dawn Keepers" is squeezed thin, engines at full spin toward the future as if the millennial turnover is some kind of finish line. I imagined the experience would be similar to that of finishing any race: the runoff, some heavy breathing, hands-on-knees contemplation of one's performance and then casual disbursement. Back to business.

He brought this one up because he likes the angels. I like them too. They part the curtains of night to reveal the painting's light - ultimately all a painting has to physically offer. The painted label on the painted frame and the Plutonian curtains are the metaphysical stairs to reach the image. I'm not sure what the proud, domed temples on the back of the riverboat are yet, but I'll say the steps continue from the frame to the gangplank, through the mysterious interior of the riverboat, on up to the temple and maybe beyond that.

He is having a show in March, 2011 at the LeMieux Galleries, New Orleans, around the corner from the Ogden Museum in New Orleans where his "Elvis, Jesus, and Robert E. Lee" currently holds court. 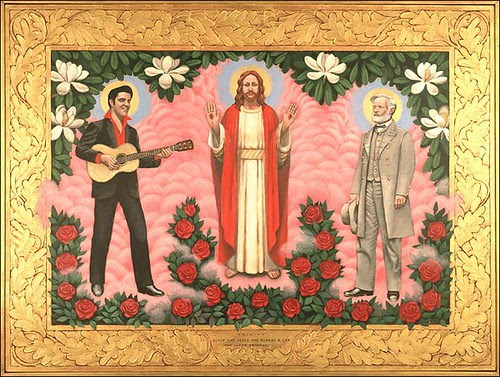 Picking through the first short chapters - if there is one over-riding characteristic in The New Literature that I will applaud, it's short chapters. You feel like you are getting somewhere. - of Jeffrey Rotter's The Unknown Knowns continued the water theme. The protagonist spends an inordinate amount of time (his own assessment, not a story judgement) submerged in a hotel pool spying the hidden aquatic world. He posits the following:

We're in the habit of calling it the surface of the water, but couldn't it just as easily be the boundary of the air?

I suspect all this boundary musing is going to be justifications for the transgressions that wrecked the guy's life - a hallmark of The New Literature that gets a little old; there are other conflicts besides man vs. himself - but yes, good stuff. Glad to have met this book smiling at the shelf at me with all it's cheery blue, and Clyde, and even Jancee who gave me a copy of his band's CD before roaming off to parts unknown.

Clyde and the other coffee shop tablees, all gathered because of a mutual friend that ain't doin' so hot, contended that the point of this kind of networking, whether internal or interpersonal, is the business of road building, that even when starts and destinations fade away there are still things to see on the road. Good stuff all around. It might have been the coffee talking, or the water, or maybe the dark Leviathan lurking underneath that we try to ignore. Full steam ahead!
Posted by Alex V Cook at 2/20/2010 03:06:00 PM