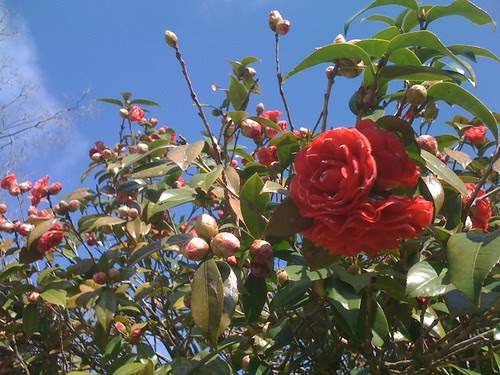 Nick Cave & the Bad Seeds - Dig, Lazarus, Dig! (lala)
The Who - Live at Leeds (lala)
The White Stripes - Get Behind Me Satan (lala)

Watching the Saints win the Super Bowl was as explosive as the camellias' vivid display to the blue blue sky. My neighborhood did not go batshit like they did for the NFC championship, but I suspect the ones with the real party artillery were down in the city contributing to this kind of mayhem.

This glimmer of spring makes me wanna get my swagger on, and the last non-soundtrack Nick Cave is a great record with which to do that. It is everything that I couldn't quite get off the Patti Smith record the other day: convulsive, turbulent, cocksure, lacing the glorious ego of rock with a strychnine trace of self-deprecation.

We Call Upon The Author - Nick...
Somebody came by my office to talk about the Super Bowl and mentioned that they never really listened to the Who before, and instead of following my instinct to summon the ninjas and have his throat cut, I put on Live at Leeds and let him bask in their ragged glory. The intro/explanation to "A Quick One" is too long an unnecessarily detailed but the train is unstoppable when it gets rolling. Who knows if it made him convert; you can hardly tell anyone anything anymore.

A Quick One, While He's Away (...
We got talking on the subject of ego and rock star dickishness and I stand firm that pop culture will slide into the ocean if we desire all our rock stars be decent, folksy people. I'm surrounded by decent folksy people all day; I want to consort with Vikings, demons, mankind-destroying scientists and drunken philosophers in my headphone time. Not always, but sorta always. Like, I bet Jack White is a petulant ass to be around, and probably some yahoo will emerge to profess his dude-bro-chillness and both opinions should be scrapped and tossed into the coal box that stoking the mythology engine behind something simple and ferocious like this.