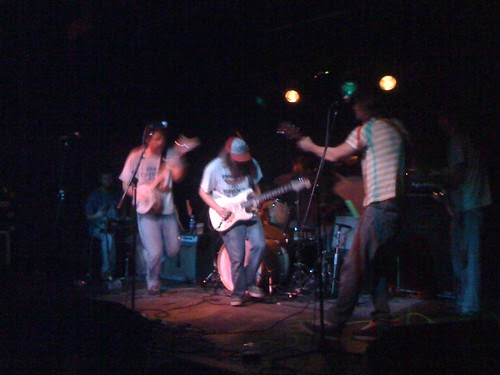 The Futurebirds jumping around the stage at Chelsea's on Saturday night. I ran into one of the Myrtles, a band whose rustic whiskey pathos meets indie racket in an arguably similar manner to the evening's entertainment, outside on the way out and he asked what I thought. I told him, "Your 'Dead Flowers' is better than their 'Dead Flowers.'"

OK, I'm lukewarm about the Gorillaz record but the song with Bobby Womack is understated and inspired, pointing their considerable arsenal at the fading sun instead of the mirror.

I started in on LCD and Gorillaz again after half-listening to them yesterday and then thought why, when I have actual David Bowie right here? Space Oddity is such undersung bounty. The title track rightfully gets all the attention - all you have to do is go "Can you hear me, Major Tom" and the whole room will involuntarily join in shoulders asway, just like when you do anything from a Monty Python skit - but the rest is a banquet of skittish wonder. "Unwashed and Slightly Dazed" is blooze rock unstrung and laid out on the deck like when they catch those giant squids. "Cygnet Committee" hoots like loons on a hidden lake.

When I was a college DJ, I was told by someone that if you played "Wild Eyed Boy From Freecloud" it would make the music director's day when he reviewed the dropsheets, and so I did, and by the exclamation points circled on the playlist returned to my little DJ cubby, it did. With the strings and Sinatra-esque dynamics, it's not the easiest song to work into a set of late-80's alternarock, but the guy came in from having a crummy college boy day that day, like a fight with the girlfriend or a bad drug deal or one of those trips to the ATM that revealed the awful truth so it was worth the effort.

Thank you once again. Mississippi Records, but how did you miss the opportunity to use "psyqc?" Or is that part of your obscured wisdom at play?

Finally, for no other reason than its own magnificence, I offer the Kinks' "King Kong" as animated by Tadanori Yokoo.