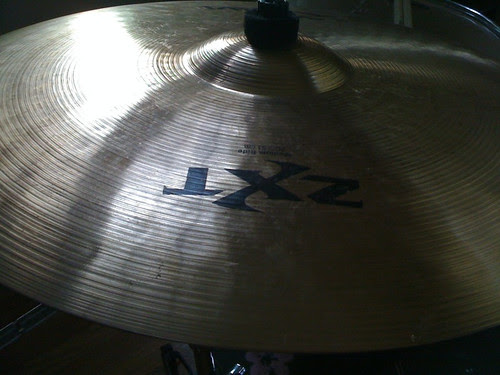 Each morning while I get dressed for work, I set my phone down on the cymbal of Maya's drumkit (our house is an old one built before the modern need of Copious Storage Everywhere and my clothes are in the music room and... nevermind) hoping that the vibrate will go off. I have a million notices set to the same vibration: incoming email, incoming texts, incoming Facebook comments, news alerts, my turn in Scrabble, etc. My phone, busy little bee, never stops vibrating. It has buzzed at me three times so far while typing this.

I set it on the cymbal because I want it to go off and rattle the cymbal, giving the myriad communication tethers I have with this world a momentary grand flourish. Instead of the dull plastic buzz, I want the world's missives to zzzzzzzing, to slooooooosh, but it never happens. No one needs my attention at 7:15 A.M. CST evidently, except this morning. I was shocked from half-awakened-ness to a polite yet tactile crrrrrriiiiiiinnnnng! from a text from one of you dear readers. The spalsh of sound matched the tone of the message perfectly, small and kind and sweet. I like when things work out that way.

It made me think of Alvin Lucier's Music for a Solo Performer, where amplified brain waves cause percussion instruments to rattle and hum.

It made me think of Walter Cianciusi's Email Sonata for Alex V. Cook, a conceptual music score I wrote on a Fluxus mail list years ago that composer Walter Cianciusi graciously realized. (available at UBU Web) According to Walter's interpretation:

[It] uses exclusively the default Outlook Express (Microsoft) sound for signaling the incoming mail. Performed for the first time by the composer Alex V. Cook, the score prescribes a repeated post of email messages from an account to the same account (an autoreferential system). The musical results (greater or minor density in time of the sound) can vary according to the simultaneous presence of users on the server in a particular moment.

Also, it made me think out the big meaning in the book I'm reading, Kate Mendelsohn's American Music, which has as one of its fiction components cymbals but moreso, touch and resonance, so thanks for that too.
Posted by Alex V Cook at 7/15/2010 03:42:00 PM