Mr. Mercury played "Electric Black Man" and Rawat was hit by a pie

OK, this dispatch is brought to you courtesy of the contestant on Who Wants to be a Millionaire last night who was from a mining town that "mined millennium." I looked it up and the closest thing I saw was a International Millennium Mining Corp., so maybe her whole life she just thought it was a millennium mine. To her credit as a hostess, Meredith Vieira picked up on this possible history of errors and did not pose to her on national TV "Now, what is millennium?" 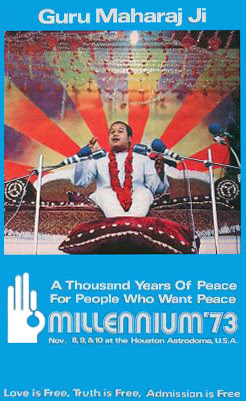 the Hans Jayanti (also dubbed Millennium '73) concert/revival held in the Astrodome by the Divine Light Mission and their sixteen-year-old leader Guru Maharaj Ji (now going by Prem Rawat.) I like massive cult events from a distance. I think they would be tedious and creepy and depressing were I up close, but from a distance they seem fabulous displays of shimmering hubris. As part of the entertainment, Stax recording artist Eric Mercury performed.


Rhythm and blues musician Eric Mercury performed during the dinner interval. Stax Records had negotiated an agreement with the DLM to make a recording of the event in exchange for showcasing Mercury, one of their new acts. They had already released an album titled "Blue Aquarius" in 1973 that was on sale at the event. Mercury, a Canadian of African ancestry and the only non-member who performed, played before an audience of 5,000 or fewer.[74] Stax recorded the performance and Mercury said at a press conference that he would give 50 percent of his royalties from the album to the DLM.[77] He later told a reporter that while he was interested in the message initially, he was put off by the pressure to join for what he perceived as an effort to gain ethnic diversity.[78]

I want to hear that Blue Aquarius record. I hope Mr. Mercury played "Electric Black Man" (above) or  "I Can Smell That Funky Music" (below) before the preachin' commenced.


Rawat was hit by a pie thrown by a person who was later attacked by followers.[47][52][53] Rawat expressed shock and regret at the beating and concern for the victim's welfare.[54]