out of the same shade of blue 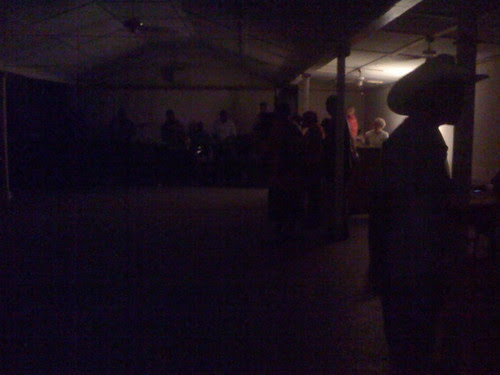 The scene at Club LA

I know it's a terrible picture but the above accurately paints the scene of a backwoods zydeco club like Club LA in Cecilla, LA. The only light was a bare bulb over the pool tables in back and a clamp-on work light over the shots bar set up by the band in the murky distance, cut beautifully here by an old man rooster-walking the bar in a cowboy hat. Squint hard enough and you can see the five or six tension cables strung over the empty dancefloor holding the place together. The particular occasion was the dance after the Ropin Pen Riders's trail ride, which I did not attend because I don't have a horse. All I got to say is the soft jam zydeco variant provided by J. Paul Jr. and the Zydeco Nubreedz might be my favorite kind. A keyboard and a modicum of booty call harmony goes a long way to extend the loveability of the old chank-a-chank. More dark pics. 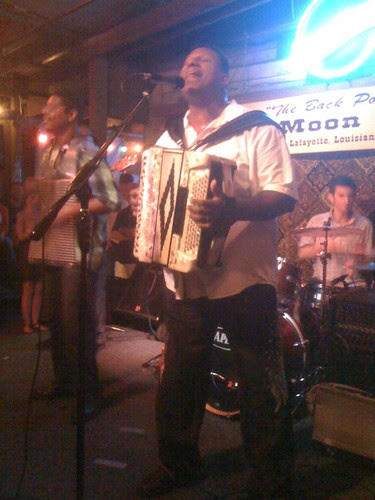 We also hit zydeco longtimer Chubby Carrier & the Bayou Swamp Band at the Blue Moon in Lafayette, a markedly more kinetic take on the music. His washboard player is hypnotic to watch. More of that scene.

The evening was a living counterpoint between black Acadiana and white, how a single peculiar thing like zydeco is fractured on that point and channeled in radically different ways. My buddy Clarke and I were struck that at the two bars we visited, within 30 miles of each other, involved in the same music yet there was so little crossover. We wondered if anyone at either place had even heard of the other, much less been there. It's also the kind of evening that makes one look at how racist one actually might be (speaking for myself) making such deductions and broad assumptions, which is good too. The closest similarity between the scenes I could see at both was there were accordions involved and each cost $10 to get in.

The next day I was reading American Music, the new Jane Mendelsohn book (I've never read the old one though a lot of people have, I guess) in the blinding heat beside the pool, wearing down the vestiges of my earache. It's good (both the book and the earache, in varying degrees); about the evocation of stories/false memories/alternative realities through human touch and while reading it, I got a sudden flash to call someone I hadn't spoken to in some time. I used to think this kind of impulse was a throb of the collective nervous system, an autonomic response that one should heed immediately but have learned that, no, these things just happen and you should stay the course and besides, my phone battery was giving out. I couldn't if I wanted to.

Then, on the last shaded part of that battery I checked Facebook and saw that very person, out of the same shade of blue, responded to a post about the very scenes depicted above. A little freaked, but not too much, I dogeared the page and got in that pool, earache be damned.

Independent of scene and my place in one, I cannot get enough of the new Peter Case record.