the molasses of Realization 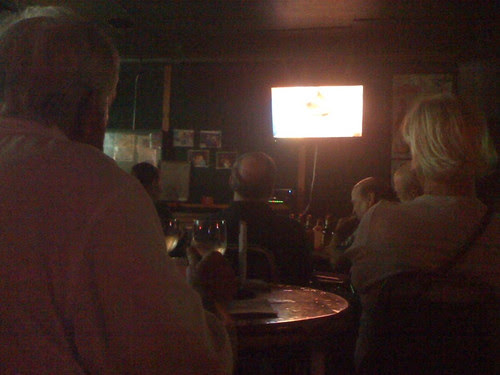 Last night I went to an Irish Film Festival held at Phil Brady's, a blues bar walking distance from my house, so I walked. I do like walking to a bar, but I like walking home even more. The combo unease of the dark + making use of the evening's special on Guinness makes it adventurous. The locus of the evening was my dear departed friend Terry Kennedy's unfinished documentary on Angola prison. Terry explained to me once that he used experimental editing and it does: scenes collide into each other mid-story, the voices sometimes are garbled beyond recognition.

The real meat of the thing though, were these extended slow-motion stretches of the infamous prison rodeo. They are shot from the bleachers with the support columns for the roof rendering the images as diptychs and triptychs in sync with the drama of stumbling prisoners and a batshit angry bull, all moving through the molasses of Realization. During one part where he watches an ecstatic gospel concert unfold, I swore I saw one person up in the stands who, in shadow looked like an A superimposed against the sky, and another couple sitting together that looked like an N. I probably could've found the rest of ANGOLA had I kept looking.

A number of stories by aging prisoners rattled off were accompanied by a distant din of wind chimes - for whom the bell tolls, perhaps and hallways and cells were shot with a lean to the left, as if the camera were becoming too much of a burden to keep straight under such narrative weight.

It goes on, much like the filmmaker would, but I think the hypnotic, even monotonous segments might be crucial in trying to imply the truth of prison. I'd sen most of it, or at least one version of it, with Terry when he was still alive. He was concerned about the editing; it apparently had put his impromptu test groups to sleep. I told him I thought that was a good sign - we are lulled into complicity with things like law and justice and the obscured mechanics by which they are run. No one fell asleep last night anyway, so that's something.

Got some really encouraging feedback on an article submission this afternoon, so we'll see. Also, because of that damn Nick Drake/fake-Christo & Jean Claude AT&T commercial, I have had it in my head to do a version of "From the Morning" except with brushed drums and cymbals replacing the guitar part. I don't know where the idea came from, but I have been walking around with it burning a whole in my potentiality. I do have a drumset at home... I don't know if this is a good idea, but ideas are good for something even when they aren't.