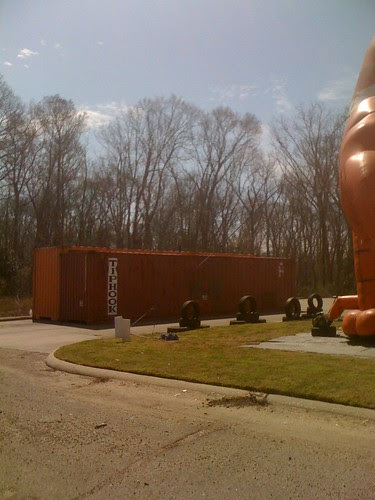 I thought Matt Perpetua was jumping the shark a bit with a 10 out of 10 rating for the Pavement Greatest Hits, but if anything underscores Generation P's need to excite the atoms of their immediate nostalgia, it is this collection. And damn, it totally holds its water, better than some of the actual Pavement records do now.

I'm tired of listing Chronic City; I think I may be reading that book forever and listing it seems akin to listing that I breathed some air today. The alt-est of alt-country bands Souled American came up in one of the book's many stoned conversations and spurred this escapade. I like how the songs takes a while to get started in this first video, it made me think something is wrong, which is exactly what Souled American wants you to think. Something generally is.

Case in point: the above photo is supposed to be of a giant inflated crawfish in LaPalce, but is instead the dumpster behind it.


Souled American -"In the Mud"

Boxhead Ensemble is the ambient folky mess of SA's former guitar player Scott Tuma and others. It's the kind of stuff I like to call "chicken fried trance music." Bow a gong, get it on, y'all!