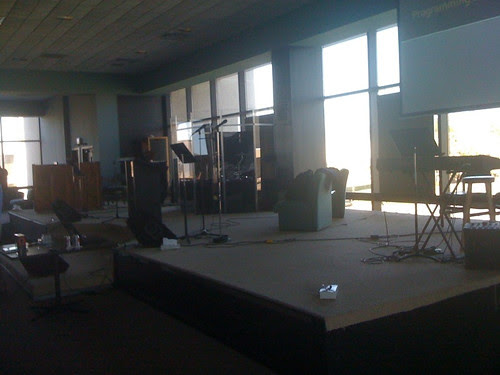 This afternoon, I went to a Microsoft TechNet seminar on Visual Studio 2010 and its integration with SharePoint in the room depicted above. It's OK if you didn't know or forgot I was a computer nerd. Sometimes I forget myself.

The room is a music performance chapel of WEBC SonLife Radio, an arm of the withered Jimmy Swaggart Ministries that partially occupies the massive complex flanking Bluebonnet Lane he built in his flush years. I forget the old boy is still going; the Big Christians in town now are over at Bethany World Prayer Center, who have three giant crosses casting their shadow over the clogged interstate. I ran into a guy I used to work with whose company rents space in the complex and he said two conditions of his lease are no alcohol on premise (I can see that) and no cursing. I live in a weirdly religious place.

I ran into my editor at the book sale and chatted about my progress. I professed wanting to get this book done so I could start on the next one, and one of the ideas I've kicked around is a ramble through the role religion plays in this weird place in which I live. The "no cursing" clause only solidifies the idea.

The Microsoft trainer did his best to stay on the straight and narrow, a condition of using the chapel, but foul language and software development go hand in hand. At least in my experience it does. I have to do some tonight so we'll see.

I do wish ol' Jimmy would do some sort of olde time musical gospel, banging out some glory on an old piano at the full gale of his talent; remember he is the cousin of Jerry Lee Lewis, who has said the two probably should have switched careers in their youth.

Here is the massive wall Bible quote fragment in the building's atrium. "...his ministers a flaming fire." The temptation is strong to graffito a "great balls of" in there, but then that might be dangerously close to cursing. 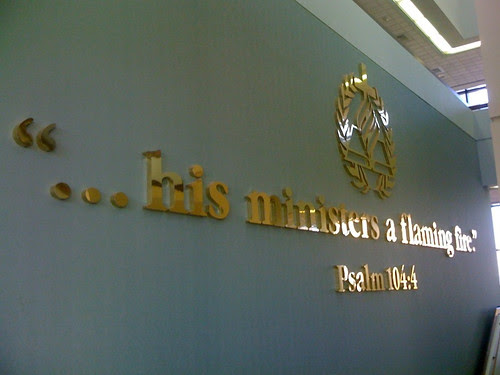