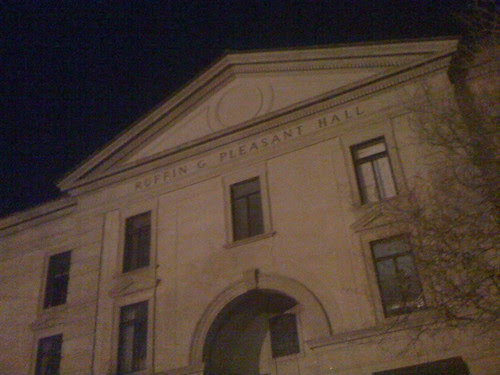 I like how my building looks like a haunted mansion at night, which I guess it sorta is. It is the oldest standing building on campus and I've heard there is a ghost, but have neither witnessed it nor heard the phantasmagorical details.

Kingston - Ayatollah
Here is a portrait of the old fellow.

As 36th Governor of Louisiana from 1916-1920, Pleasant got us ready for WWI, a big topic around our house as of late. He was born in Shiloh, LA and fought in the Spanish-American war as a lieutenant-colonel of the First Louisiana Regiment of Infantry.

The Pleasants had a way with badass names: his parents were Benjamin Franklin Pleasant and the former Martha Washington Duty.

I got all this from Wikipedia. I thought about saying the ghost told me all this but I don't like to unnecessarily mess with dark forces. Ruffin had a stormy relationship with Huey P. Long over the years and dig this salacious bit about his poor wife Anne:

Anne Ector Pleasant died in 1934 after accidentally drinking a poisonous antiseptic in a dark bathroom in their Shreveport home. She was the founder and headmistress of Pleasant Hall, a coed private school in Shreveport. She had sued then U.S. Senator Huey Long for having caused her to be arrested on false charges and for having demeaned her as a "drunken cursing woman" when she sought to examine state public records in the Capitol in Baton Rouge.