I started this last day of Jazzfest miraculously running into the people I was looking for in the massive crowd and with them took in Cedric Burnside & Lightnin' Malcolm, which I think everyone would have enjoyed a lot more if not for the draconian ushers in the blues tent. For real, we can't cut up a little in the blues tent? No wonder this music is dying out; the people putting it on completely miss the point of it. I'm glad the rest of Jazzfest doesn't have this problem. 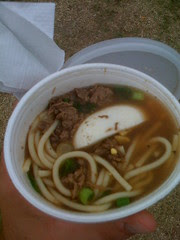 I have experienced the storied pleasures of Ya Ka Mein - which I understand to be 9th ward convenience store fusion cuisine: Asian buckwheat noodles and hearty beef stew, with vegetables and a boiled egg floating in it. Its an odd thing having those noodles without a trace of the seasonings that generally accompany it, but is great festival food, both light enough and filling enough to push you on to another tent. 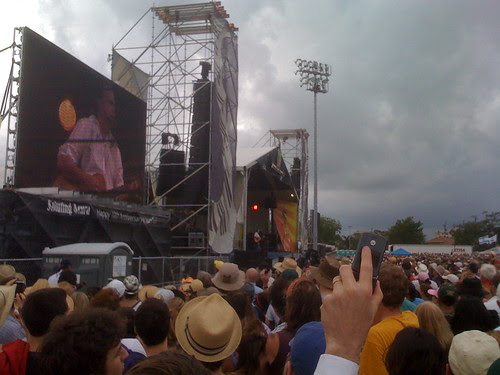 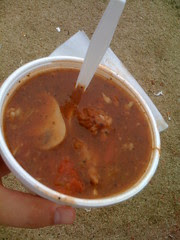 Alligator sauce piquante. I was on my way out after seeing Neil Young run his hits through the wringer (I did have a "whoa dude" moment during his set, thinking the real Neil Young is that guy up there and he is strumming his guitar and we are all listening to it and we all know the song by heart and that is rare and magical. Must have been the dehydration) and catching a song or two by the ever-lovable Los Lobos, and the sky was about to open up, when I looked across the vast array of food stands. I don't know how an out-of-towner does it; I live here and can get this food or a reasonable facsimile any time I want and I get giddy looking at all of it. The sauce piquante was milder in spice than I like, but then I like sauce piquante to involve a trip to the burn unit, and a perfect medium for alligator, which truth be told, I don't really like all that much, but am compelled to eat at least once during festival season. This beat my usual gator-on-a-stick to which I usually succumb. 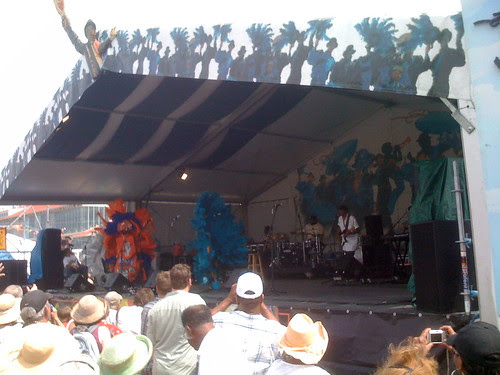 A mango ice was also eaten during the Iko-consciousness-raising spectacle of the Wild Magnolias , but went un-photographed. Also, no Jazz was observed by me during this last day of Jazzfest, should that fuel your fire. 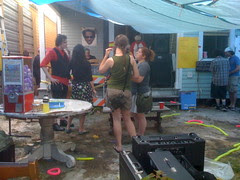 I made it out to Noizefest, an anti-Jazzfest of scrappy avant garde noodlers and agents of corruption held under a makeshift tent of blue tarps in a back yard in the Bywater. Among the array of contraptions competing for attention was a sno-ball machine that created 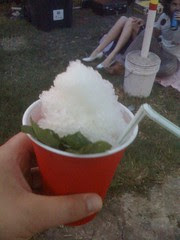 a mojito sno-ball, complete with a fist of fresh mint plucked right off the plant. Purists would scoff at this: they were out of rum at this point so they plopped in a shot of vodka. But Noizefest is about anything but purity and sucking the juices out of straw-pulverized mint at the end is a brilliant sensation with which to cap off a day of noise and sun. 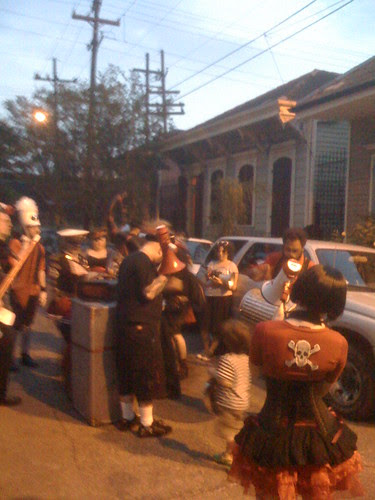 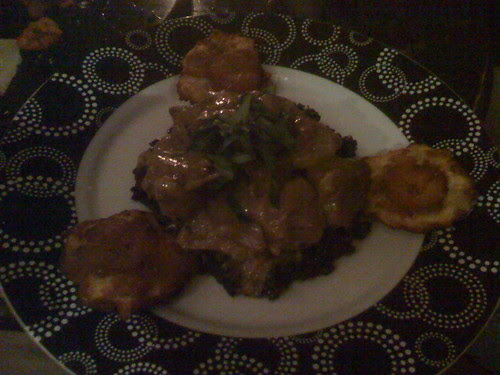 Once the Noisician Coalition second-line was over and I'd had my eardrum-full of blistering racket, I met up with friends at Delachaise and dug into this pork loin cooked in Thai green curry served over wild accompanied by a trio of banana fritters. There was also an excellent cheese plate and a pile of duck fat French fries. It was all better than you think it might be, which can be said about the whole day.

The other side benefit of this day is that I had to walk the length of Bayou Rd. back to my car and sought refuge from the rain in the Domino Sound Record Shack, which made me momentarily wish I still had all those shelves of LPs I once had, just so I could add to them from their coffers.
Posted by Alex V Cook at 5/04/2009 09:17:00 AM