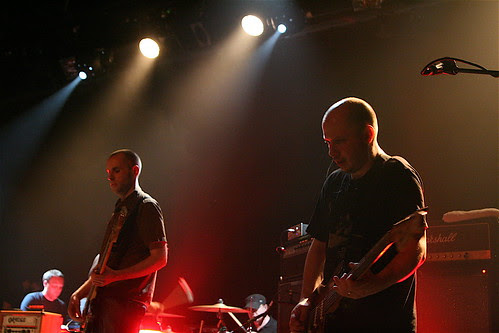 I wrote something for the long back-burnered book project that involved an in-joke about this most oppressive record by Swans and pulling myself across the floor of my house with a rope. I'm into it.

I also wrote a review of Inside Your Guitar the lovely new album by the terribly named band It Hugs Back, which will appear on these pages as soon as it released to the web. (listen) and one for the Horrors' Primary Colours, also appearing shortly under similar circumstances. (listen)

Also, this Mogwai performance from a few days ago. (via NYCTaper). And whatever that cursed commercial is with that certain omnipresent Moody Blues song and the jellyfish has been running in a loop in my head... at least it is time-appropriate. I'd forgotten how much I like the evening time to get away part at the end of this song. (listen)

I've also been weighing how deeply my heart is into this semi-maniacal documentation of my listening habits. I'm still doing it, so I guess it is still there, but I'm considering a mutation in how I do it. I did change the blog layout recently, and that has tidied things up a bit, but every cleaning session always reveals another mess. Considered yourself theoretically forewarned.
Posted by Alex V Cook at 5/05/2009 03:22:00 PM