the superior quality of the digital format...

...may highlight certain limitations and idiosyncrasies of these historic analog recordings. (warning on the back cover of Pioneers of Electronic Music) (listen)

This album features one track by the aforementioned Davidovsky along with a couple from Vladimir Ussachevsky, Bülent Arel, Alice Shields and a woman bearing the enviable name of Pril Smiley. I spent the better part of a summer listening to compilations like this from the library in my hometown, picked up on my way home from eight hours at the hamburger stand, and to this day I'm still relaxed by the disjointed bleeps and echo chamber roars of this stuff. 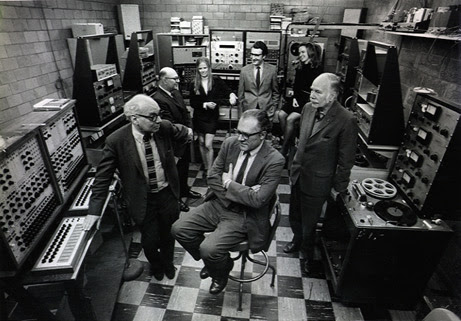 One of the unanticipated results of this new way of creating music by slicing up tapes rather than corralling orchestras, is the openness it had to female composers, moreso than in traditional classical music, anyway. The two women represented on this compilation also have two of the more engaging pieces of music.
Kolyosa - Pril Smiley
Transformation Of Ani - Alice ...

Also dig this ethereal piece by composer Daria Semegen on a second compilation of works from that studio. (listen)
Electronic Composition No. 1 -...
Posted by Alex V Cook at 5/20/2009 12:40:00 PM