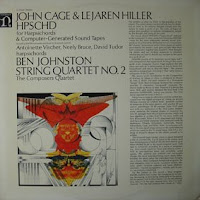 John Cage & Lejaren Hiller - HPSCHD (via ANABlog) This album was a prized possession of mine. Described thus:

HPSCHD, a collaboration between John Cage and Lejaren Hiller, first performed on May 16, 1969 at the University of Illinois at Urbana-Champaign, called for 7 harpsichords playing randomly-processed music by Mozart and other composers, 51 tapes of computer-generated sounds, approximately 5,000 slides of abstract designs and space exploration, and several films, all of which were performed or presented simultaneously in an asynchronous and exuberant anarchy of activity. HPSCHD was the ultimate multimedia experience.

The album came with a unique computer printout (reproduced on the ANAblog page) detailing how one was supposed to adjust the volume and tone controls of the stereo over the 21-minute ruin time, basically offering the listener an opportunity to be a part of the process. I listened to it last night for the first time in maybe 20 years while walking the dog, finding it not that much more disorienting than the deeper recesses of Animal Collective, albeit eschewing the band's reliance on rhythm as a tie that binds. Perhaps we have come a long way.

All I know is, to get a then-twenty-year old John Cage record in 1988 required a lot of fruitless searches through neglected record bins, wide-eyed hope, and of crossed fingers. I believe I paid $3.99 for my copy of this record at Beckham's Books in the French Quarter. A friend to whom I entrusted the cream of my record collection recently sent me my signed copy of Variations IV also purchased on that same trip, which I may actually have never listened to, until now. The idea that it is available by an idle click of a mouse is a little astounding. It was explained in this tidy introduction opening the album.

Performance Introduction - Joh...
Both of these records involve a giant collision of sound unleashed from the human compulsion to order them. HPSCHD does so with mathematically perfect harpsichord figures by Mozart by setting them against a locust din of bloops and bleeps; Variations IV involves radios and record players recreating the havoc of existence in their array. You make sense out of it by imposing it on the sounds, or you let it flow past you without it making sense. I've recently said I enjoy the ideas of Cage more than the reality, but I may have to recant. Or I can quit imposing my idea of "sense" onto this music as I frequently have to do with life in order to get along.

Eric Salzman - The Nude Paper Salmon (also via ANABlog) This is another piece, cut of that same everything-now ethos of the late 60's but with a markedly more orderly way of going about things. It involves madrigals, late-60's tape electronics, being "post-modern-music, post-modern art, post-style," and actor Stacy Keach. That's all the useful info I can realistically relay at this point.
Posted by Alex V Cook at 5/08/2009 01:07:00 PM