The Cave of Psychro 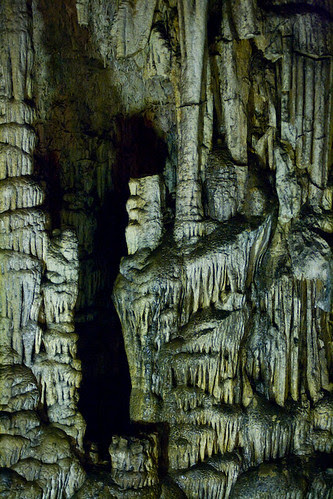 Julian Cope offered up his flower of analysis to the Irish doom battalion To Blacken the Pages (myspace) deeming their A Semblance of Something Appertaining to Destuction his January album of the month, and in that blossom lay this bit of metaphoric nectar:

Way up high in the mysterious mountains of central Crete, arduously accessed only via a precarious single trackway, and located in the higher foothills of legendary Mt Ida - the greatest Cretan mountain of all - the vast Antron (or cave) of Immortal Zeus is an inaccessible pad even for a Greek God, and is said to have been chosen as the birthplace of the greatest Greek God of them all, in order that his jealous father Cronos would not find the baby and kill him. Why do I tell you this? Why, because the colossal reverb that informs the music of To Blacken the Pages is very nearly as mighty as that located inside the Antron of Zeus.

so I looked up the Antron of Zeus and found it to also be named Diktaion Antron or Cave of Psychro (some websites have it incorrectly listed as the Cave of Psycho, which would be too good). GreeceIndex.com offered up this little nugget that is now my gold standard for travel brochure copy:

From the very beginning of the excavation, the Cave of Psychro was called the Diktaion Antron, as legend has it that this was where Rhea hid to give birth to Zeus, the Father of Gods and Men, safe from Cronus’s infanticidal tendencies. The goat Amalthea, who according to a different myth was actually a Nymph, nursed Zeus, while the Curetes (mythical daemons and followers of a deity) drowned out his cries by dancing and clashing their spears on their shields. Another legend has it that Zeus was nursed by peaceful bees.

Image of the Cave of Psychro from here

Here is To Blacken the Pages setting "I am screes on her escarpments" from their aforementioned album to footage of atomic bomb tests: