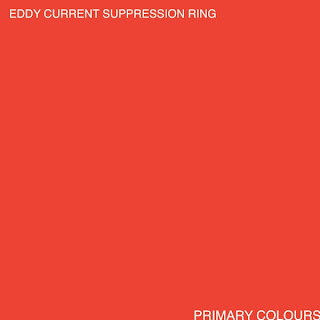 Perhaps I only had to express doubts about this exercise to make such incredible music to pop up and set me straight. Eddy Current Suppression Ring's Primary Colours is one of the best punk records, in the Buzzcocks, Jam, Modern Lovers, pre-hardcore-sense-of-punk, I have heard in ages and ages. (via OngakuBaka) I wondered what, besides the Obama campaign, was the point of 2008 and now I know it was to be the bracket of time in which this spindly, bouncy, effervescent, biting record could be crafted. I am so into this record that I don't want to play anything after it, fearful that the spell might get broken.

Patterson Hood's excellent second solo album Murdering Oscar (and other love songs) is a safe bet for maintaining the spark in the air. It's not a DBT record diluted, a lone shell fired from a shotgun built for two, but its own related thing. More on this later. Available to mortals in late June.

I stopped by a friends' studio over lunch to chew the fat about Jazzfest, and he thrust Poisonville by Ronny Elliott into my hands and ears (listen). Hillbilly genius drunk rock from a guy who has been that since 1964, playing with everyone imaginable. he sounds a lot like Mike Cooley, P-Hoods's partner in Drive By Truckers. His song "Burn, Burn, Burn" is the shit.

Burn, Burn, Burn - Ronny Ellio...
"Total Destruction to Your Mind" by Swamp Dogg is one of the coolest songs ever. From the somewhat hyperbolic promise implied in the title The Excellent Sides of Swamp Dogg Vol. 1 (listen). There are more hits than misses, but let's not get crazy. "Total Destruction" however, exceeds all levels of praise offered.

Total Destruction to Your Mind...
Were I not in such a buoyant mood, Marvin Gaye's divorce odyssey Here , My Dear would be excruciating, like hearing a friend go on for far too long about their partner. It strikes me now as hilarious in its blatant self-righteousness and hostility, like a SNL skit done right. (listen)

but even this mess ends in a Funky Space Reincarnation. Means to an end.