all you Klingons in the f*ckin' house, grab your backstreet friends and get loud 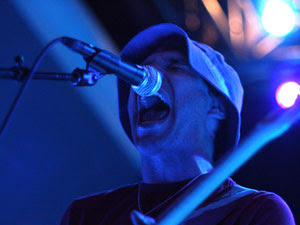 Animal Collective live at the 9:30 Club, streaming from NPR - Animal Collective is starting to remind me of the Beastie Boys after we all got used to the idea of them being part of the landscape rather than some result of massive subterranean forces breaking the surface; they still make music arguably just as interesting as before, but the patina of inventiveness about them is starting to thin, and I wonder if it will be as interesting after it completely fades. Don't get me started on Beck.

I mean, did you even ever listen to To the 5 Boroughs outside of that one song, whatever it was way back in 2004? Until now, I haven't. (listen) And tight as it is, like boutique jump rope jingles, I probably won't again. Animal Collective are starting to have that same effect on me.
Posted by Alex V Cook at 5/12/2009 01:37:00 PM