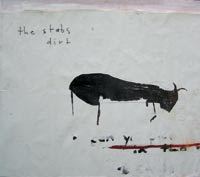 The Stabs are hypothalamaic overdrive ecstatic doom punk in the finest Australian tradition. I suspect these miscreants stole guitars because they heard they are better sources for feedback than screaming into burning trashcans. Excellent music for sneering unnoticed at coeds while on a cross-campus walk to check out a J.G Ballard (RIP) book from the library. Dirt, courtesy of the fine fans of ongakubaka.

Elad Love Affair dealt in a more contained form of catharsis rock on this consciously titled album A Woman Gives Birth to a Gun and it Stabs Her (listen), delivered in female voice backed by a bunch of (I'm guessing) dudes that can likely jam in odd time signatures. It is overwrought in every aspect, she sings too much and with too much umph and urgh, they play too much on too many parts in a song too bifurcated to be a song anymore, and it is in this excess of excesses I find this to be kinda beautiful. Why hit an easy target when you can aim at the moon in hopes of shooting it down?

Arlo's Stab the Unstoppable Hero (listen) might be one of the only non-emo-gibberish albums on lala with "stab" in the title. Instead, it is a boundless power pop, a plywood ramp from which a thousand summer BMX's fly, not for stunt but to simply get airborne.