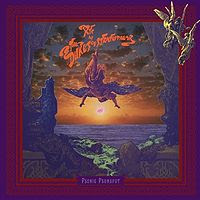 Kimberley Rew - Essex Highway (listen) I was yesterday made aware that Kimberley Rew of the Soft Boys was also one of the architects of Katrina & the Waves, and in the admittance of this, two different learned friends pointed out Soft Boys and Rew albums to check out. This is why we confess things I guess; salvation comes in and fills the gaps. I could find none of the suggested records, mind you, but one must cut one's own path through the thicket and this little number was sounding great, starting appropriately with "Bless this Album" a smart little church hymn vamp, and suddenly the Internet went out. I wonder if that is how I will find out the Rapture happened? Thankfully it came back on. Anyway, this album is charming, clever, and at points rocks stratospheric. Maybe he is actually the talented one, and I was too hypnotized by Robyn Hitchcock's word-salad-tossing skills to notice, because this is not unlike one of those many sweet perfect-pop Egyptians records, except the lyrics make sense.
Ballad Of The Lone Guitarist -...
The Dukes of Stratosphear - Psionic Psunspot - for review. I thought I might never get tired of this album, but I listened to it four times this morning while reviewing it, and well, I might be tired of it. It is a brilliant record and too bad it didn't pull XTC out of their shell a little.
King Crimson - Live at Fillmore East (New York, NY) 11.21.1969 (Wolfgang's Concert Vault) There is a Wolfgang's Vault app for the iPhone and because of it, I spent my spring/lunch break walking around this majestic deserted campus with the pulse of "Mars" from 40 years ago throbbing in my ears. I like technology.
The Incredible String Band - Live at Fillmore East (New York, NY) 06.05.1968 (Wolfgang's Concert Vault) There is a lot of stuff up in here that I wouldn't expect, like an Asobi Sesku show and another by the National and so on. If only there was a stash of Krautrock infinity rituals available for ad hoc levitation....nope, didn't make it suddenly appear. Maybe I can convince Julian Cope to develop a Head Heritage app...nope that didn't magically appear either. There is always Nine Inch Nails, I suppose.