containers and their drivers

Terry Edwards & the Scapegoats - Yesterday's Zeitgeist (listen) The serendipitous bounty of clicking around! Behold the meeting of innocuous hi-fi pop and the flameout Creative in the cheeky cheeks of punk. With saxophone. Here they are pulling at the seams of the Jesus and Mary Chain.
Never understand (Live) - Terr...
and the Fall! Hardly anybody covers the Fall anymore; idiosyncratic as they may be, they are ripe for interpretation
Container Drivers (Live) - Ter...
The Chatham Singers - Juju Claudius (listen) I was a full-on Billy Childish supporter until all his anti-contemporary art screed under the rubric Stuckism came out around the time the Damien Hirst crowd hailed a new cool Britannia. Not that these artists are immune and undeserving of criticism and ridicule; it's just that one of those artists Tracey Emin, whose art involved laying bare her sexual history, put Childish's name in a prominent place on a tent quilted with the names of everyone she had slept with 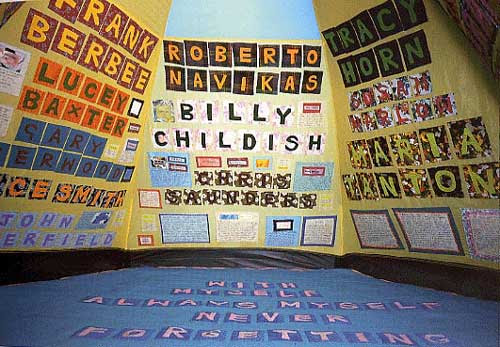 and Childish's protests against contemporary art practice struck me more as petty revenge at this than actual sentiment. But it gets people talking and doing things, so that's something. And from what I gather, Childish disassociated himself from it in 2001. And, beyond all, I love Billy Childish's myriad rock projects, of which this is one. Chain gang blues rooted in myth, stretching out across the living to the edge of ruin. Rock does indeed project.
Juju Claudius - The Chatham Si...
Armitage Shanks - Shanks' Pony (listen) One of the first online things I ever wasted too much time on was an Internet garage rock/punk radio station that played a lot of Armitage Shanks. I recall getting a warning from the network admin that I was absorbing a large chunk of the company's bandwidth doing so and was ordered to cease, which I didn't. Not exactly spitting on the cops invading my Bristol squat, but mildly punk rock nonetheless.
Dagger Attack - Armitage Shank...
Posted by Alex V Cook at 4/07/2009 09:59:00 AM