Hubert Sumlin - Wake Up Call (listen) I listened to "Huber Runs the VHoodoo Down" about six times now partially because it merits repetition and because I kept getting interrupted. During one of those interruptions I went to see what "running the h/voodoo down" meant exactly, and I came across critic Phil Freeman's excellent blog Running the Voodoo Down and therein this distinction between Dio-era Black Sabbath and Ozzy-era Black Sabbath and why Ronnie James Dio, Tony Iommi, Geezer Butler and Vinny Appice reformed as Heaven and Hell as opposed to Black Sabbath.

It's a wise decision. Dio-era Sabbath was a whole different beast from the Ozzy-fronted version. A lot had to do with lyrical perspective; Dio's mythic archetype-mongering was a far cry from the gloomy, occult blues of the early years, when bassist Butler wrote most of the words. Where the hyper-theatrical Dio came off like a wizard on a mountaintop, Butler's lyrics seemed to come from the perspective of a terrified peasant below.

I am a sucker for wizard/peasant analogies.

Hubert Runs The Hoodoo Down - ...
Eddy "The Chief" Clearwater - West Side Strut - Feathered, alleged Chuck Berry-impressionist Eddy "The Chief" Clearwater was dialed in next on the computer playlist, saving me from tumbling down the "do I like the idea of Ronnie James Dio more than the reality of Ronnie James Dio" deconstructionist rabbit hole that opens up beneath me whenever faced with the propect of listening to Ronnie James Dio. The other thing that happens is that I have "Rainbow in the Dark" stuck in my head again. It was partially wedged in because of this intense rainbow I saw yesterday. 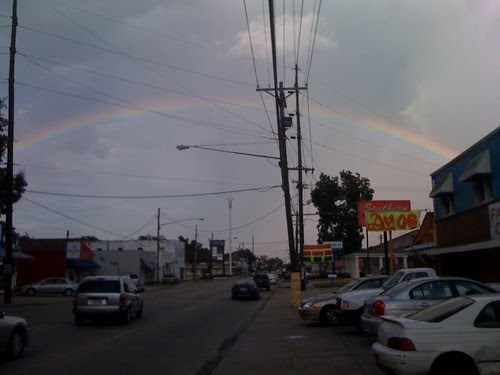 But now it's in there good. So yeah, Eddy, thanks for keeping me on task.