The ringer is an actual bell! 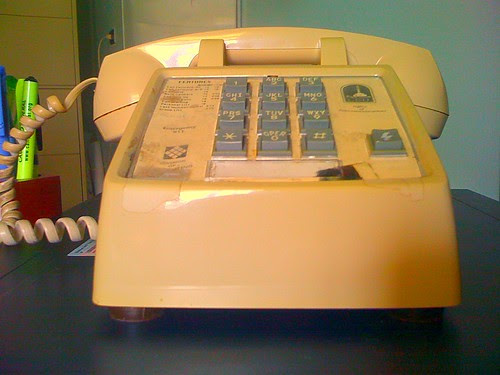 I haven't had a phone hooked up in my office since I moved in but recently people have been on me about it. I found everything but the power cord for the cheapo cordless (irony!) I had at my last location and was sighing at the concept of wading the bureacracy to get a phone I didn't want when, like a mammoth blowing its trunk from behind a clutch of giant ferns, this dinosaur revealed itself in the back of my closet. It's seen better days; it may have been used to bludgeon someone, but it works. The ringer is an actual bell! No power cord because it runs on the electricty of the universe! I wonder how much unused power is pumped through the phone system just for me and the old grandma that still has a phone like this. I still hope it never rings but if it does, it will do it with charming electrical universe wonder. I secretly hope I can't do voicemail on this phone but I'm sure I can if I just call myself, which I can do now because I have a phone. The fact that the picture of this phone I didn't want was taken with the perfectly good phone I already had and prefer to use says something about the human condition. Maybe the Doctrine of Eternal Recurrence is at play. I just got an email asking that I call somebody about something. Look out world, I'm phoning! 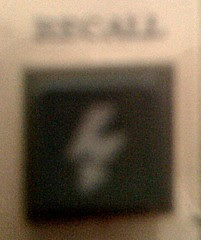 This says something about the fallibility of memory. Or about shooting out sparks. Or maybe that's the button I press to call Throbbing Gristle.
Posted by Alex V Cook at 1/31/2011 02:38:00 PM