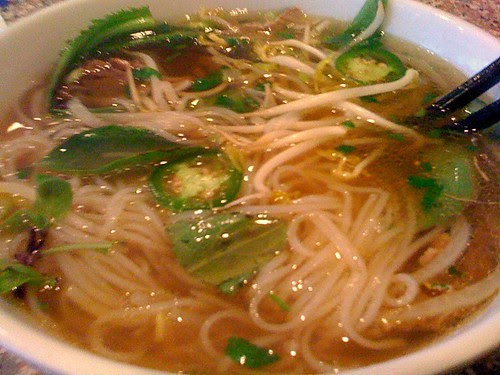 I haven't been posting food pictures as much lately because we are on a reprogramming plan and it's not that I'm taking in wholly unphotographable fare, in fact, very much to the contrary, but I'm trying to de-Henry VIII myself a little with relation to food. That said, the phở at Phở Quynh is pretty phở quynh good. I wonder if it is named that way on purpose? I'm inclined to say no, they seem rather no-foolishness up in there.

The Todd Selby interior design hipster porn compendium through which I thumbed at Books-a-Million is the opposite - constant nonsense, NutraSweet hipster interiors populated by beautiful people that you want to throttle for being wondrous specimens. The only places in there that bespoke a marked sense of aesthetic were Karl Lagerfeld's studio and some Parisian rich kid and his model girlfriend in his family's ancient spectacular library. Of course those places are amazing. Oh, and Jonathan Adler and Simon Doonan's place looked cheery and tacky and fun. And a gal who lived on a tidy little boat in a London canal and hung out at the harbor club's ramshackle private pub housed in an ancient water tower. That seems an enviable existence. Otherwise it was one wheelbarrow of juvenalia spilled out and rearranged on re-purposed detritus furniture mixed with a level of nature that is unwieldy in a real person's home after another.

The sense of aesthetic will weigh into my review of Andrew Ervin's three-novella book about Budapest and those who don't belong there when it appears this week.

RIP Milton Babbitt. I met him once when he lectured at LSU and I asked him beforehand how technical his lecture was going to be. He asked if I was a graduate student in composition and I said no, an engineering student (which I was for a while) and he laughed, "Well, you might be able to follow the math then." All I really got from the lecture, something he didn't say himself, is that the secret to his art lies not only in the rigor but also in the puns. The whole of the architecture housing the meaning contained inside and nothing else. All that setup to the end of a quick laugh if you have the deication to make it to teh punchline.