The bell tower is a hipstamatic penis penetrating the sky's burning rose.

Talking Heads/Tom Tom Club member Chris Franz is on my friends list and he posts great flyers from back in the era like the one below. And so yeah, I've never heard of Billy Falcon either. Adrenalized, highly-saxophonized Springsteen/Costello/Thin Lizzy-esque inna 1979 stylee, i.e. freakin' awesome, yo, full of dreams big enough to level all of Asbury Park if not channeled properly. "Billy Falcon's Burning Rose" is a great band name. Why doesn't anyone do that - go ahead and claim ownership of a band rather than maintain the pretend democracy of "and the." I suppose owning a Burning Rose sounded flashier than owning a Sunshine Thunder Band. 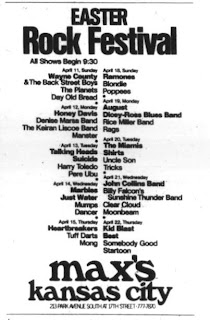 Billy Torpe, "Children of the Sun" I first heard this in the nth hour on a car trip somewhere early in our marriage and my wife couldn't believe I'd never heard this song and I can't either. Maybe because each time I hear it is like its own cocaine electric sunrise of a hundred blazing suns, roasting unicorns where they stand on the red plains of Mars.

NPR is saying this new Bright Eyes is the best Bright Eyes album ever. I'm the only person walking the earth, Conor Oberst included, the believes Cassadaga is and this one is good but segues perhaps a little too well into the discofied bonus tracks on the Billy Thorpe reissue and unless he hollers something better than "THE WHORE OF BABYLON" and makes me believe it, I'm sticking with my original decision.