one more plate of fish 'n' chips for the road 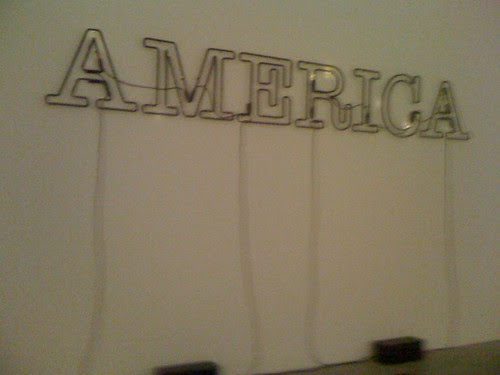 
Unassuming-looking outside but massive inside - but there's still a kind of humility that really appeals to me - almost everything white and a lot of handmade things!
- Zadie Smith, On Beauty

I bought On Beauty at Heathrow, killing off my pounds and though it seems to kinda be the same book as White Teeth - not complaining; White Teeth is quite a book - it revealed itself to be a perfect choice. The bumbling professor had just taken the Heathrow Express into Paddington Station just as we'd done the opposite. He was seeking his son who emailed the above sentence describing the houses in England and it hit me as a perfect description of England in general.

We didn't get to be too dazzled by London; when we arrived on out last day there was a parade bisecting the city so we overpaid a series of taxis to get us to the Tate Modern and allow us our own descent into home. The rock stars there are mostly American: the long, early Pollock Summertime: Number 9A as well as 1948's Naked Man With a  Knife, from when he was under the spell of the most America painter there is, Thomas Hart Benton. Cy Twombly is a close second, even though he a classicist of sorts and an ardent ex-pat (or maybe a never-was-pat) because he can obliterate your consciousness with the stupidest move. Only that which you love the most can compete. 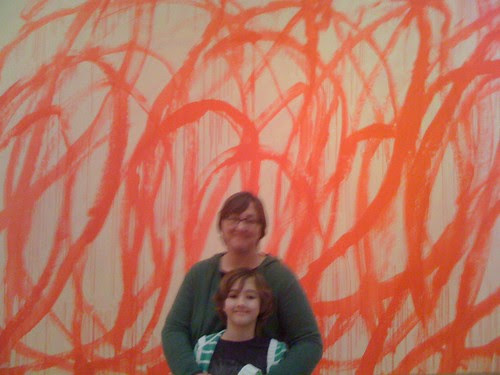 I was struck as always by how much I love DeChirico and Ernst and Picabia and how I should not seek out Kurt Scwitters' art in the flesh. I was long ago given a book of Scwitters whose reporductions weirdly trump the actual objects, which look grad student weak. I was thrilled to see Braque's Clarinet and Bottle of Rum on a Mantelpiece, it's a staple that happens to be just one of the best things ever made and the guy doing the gallery talk said the Cubists collapsing three dimensions on the canvas changed the whole game because now a painting was a place to mount an action rather than contain a picture. I knew that already but not in the way he said it. Which is why we talk about anything. 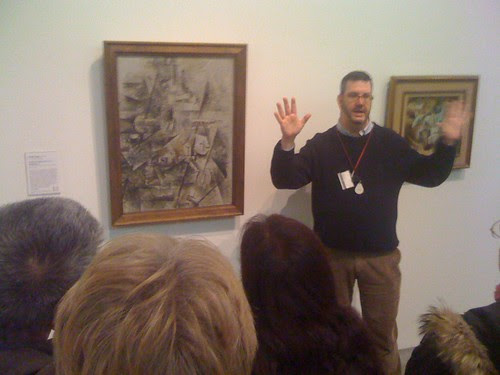 These are the two stunners I was not expecting: 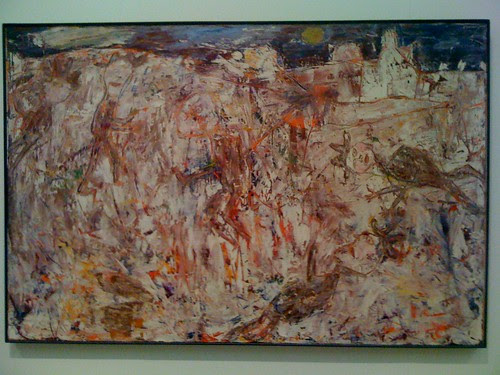 and the redder than all reds 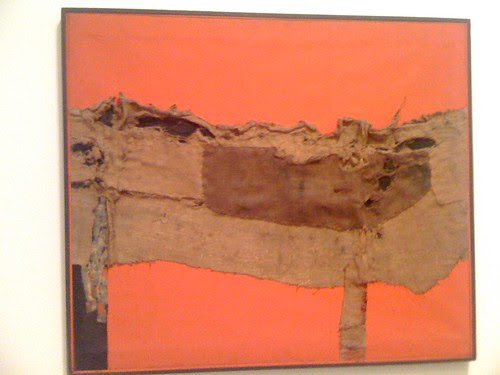 I'm not sure I can quite yet speak about the Duchamp room where Richard Hamilton's reproduction of the Large Glass sits among sister works of their collaboration. I need to one day go to Philadelphia and see the real deals and then I fear I will never talk about anything else. 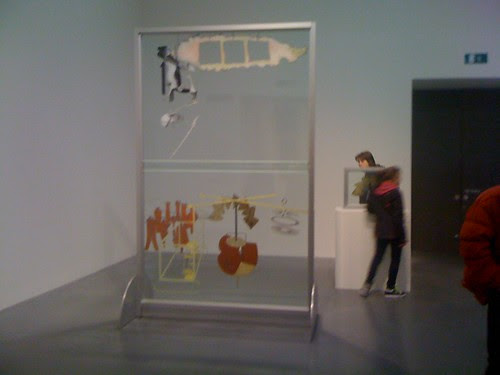 I don't really care for Richard Hamilton's art. His work is too clean and clingy to the idea for me, and he seems a curious person to have done this sanctioned reproduction; Duchamp is about lies and dust and alchemy and smart moves whereas Hamilton is about everything but. But still, it's a great piece and a smart extension of the original, which in my mind is the great piece. Duchamp is a guy in which the best feature of his painting (even once-removed)  is your presence in it. It's like those Victorian houses described in Zadie Smith's quote, like the Tardis in the episode of the new Dr. Who I watched on the plane over (the one where the Doctor pays a visit to Churchill only to find Winnie's unwittingly enlisted the Daleks to fight the Nazis during the Blitz) and England As A Whole - grander inside than the exterior and its inhabitants will dare to express. 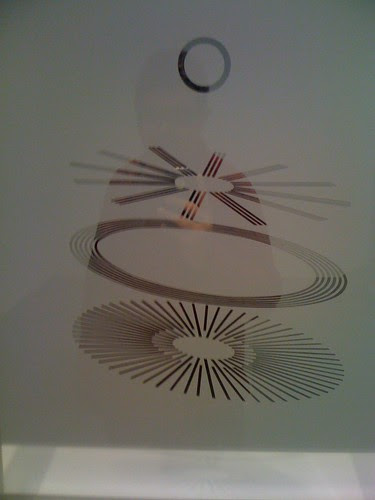 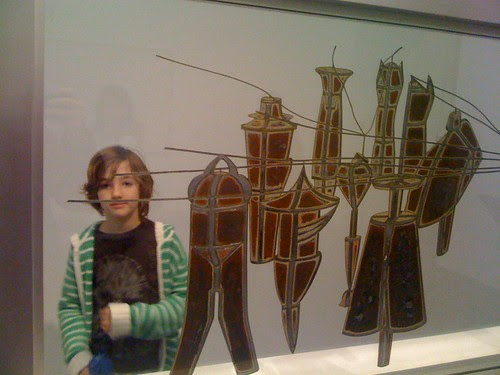 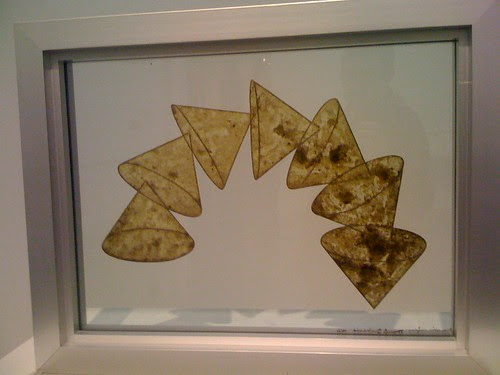 This was the real badass, though Maya didn't like it at all. The laundry bugged her. The Tate Modern website has better pictures of everything. All museums should do this. 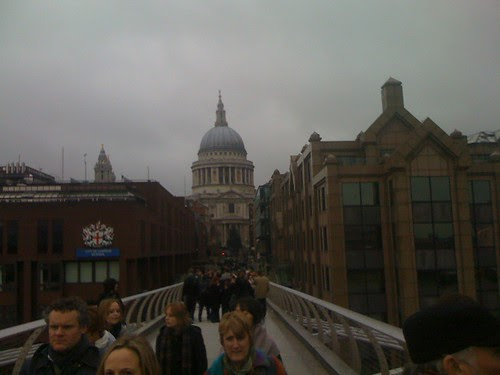 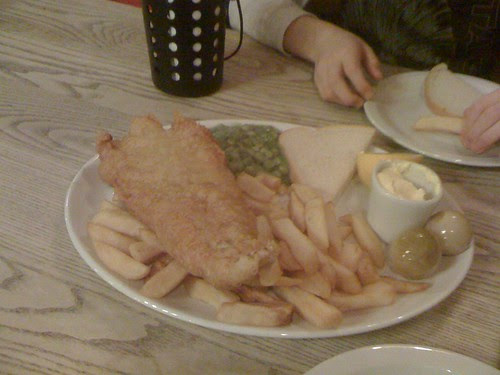 We crossed the Millennium Bridge, the one destroyed by death-eaters in the the last Harry Potter movie, up around St. Paul's, through Green Park in the cabless, parade-hobbled drizzle, then in another cab outside the Ritz, kinda tired of England's shit by the time we got to the hotel, one more plate of fish 'n' chips for the road, three gate changes at DFW and a spicy chicken sandwich from the Wendy's near our house and we are back. Hello 2011. We're ready for you even if you drop all the birds from your skies, first goddamn thing in the morning.
Posted by Alex V Cook at 1/04/2011 10:05:00 AM