the vast heliograph of lightning 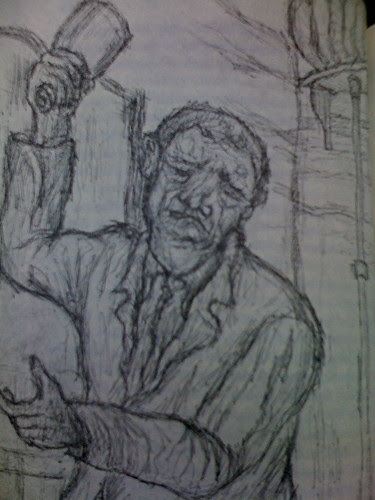 Illustration for Malcolm Lowry's "Lunar Caustic" by J. F. Ulysse, who, according to the Winter 1963 Paris Review bio, "began drawing at the age of 4, then as now, with his left hand."

I finished "Lunar Caustic" over lunch after a meeting that left one longing for the solace of a drunk's account of a week in Bellevue. It pulled itself together at the end in that deliciously triangular way Malcolm Lowry has with his characters. A trio of malfunctioning humanity supports itself as it tumbles alongside those too plain or base to not malfunction in the world's cruel chaos. One of whom, the manic and charming Mr. Battle manically semaphored through the window to ships on the river, while:


Only the vast heliograph of lightning responded distantly.

The novella is rife with ships; the narrator believe himself to be one as the DT's take hold, while a young murderer Garry desperately tells seafaring stories he doesn't understand to be tragic, eager to be interesting. Icebergs get smashed. Whales are killed. Elephants too. Madness is generally acquiesced to in "Lunar Caustic", opposite to how it was denied in Lowry's masterpiece Under the Volcano. Bottles, lots of bottles, bob around in the choppy seas of dialog. Maybe we are all ships in our own bottles. Ones with little triangular sails hoping to catch a little wind that might pull us out of our bottles and dash up valiantly on the rocks.
Posted by Alex V Cook at 1/11/2011 04:12:00 PM