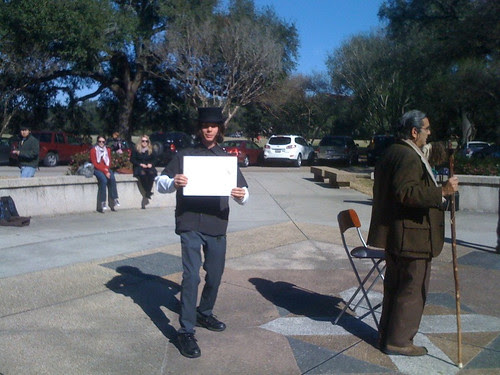 Brother Jed has been out there casting the fornicators of our fine university into the fiery mouth of hell for countless springs now, though I wonder what has become of his cohort Sister Cindy? Did she succumb to her oft-mentioned former sinning ways? I always kinda liked her; she was scrappy. Who will condemn our soroity sisters now? It occurred to me when I took this photo that Edward Scissorhands has likely been out for the entire life of the detractor on the left; his sign says "I'm Not With Him --->".  I like how resolute his shadow appears. On the other side, obscurred by Jed, was a girl offering "Free Hugs from an Athiest."

Man, the Nightingales liked a long-ass song. The Fall was always good for that too. If I had to go pee during my set at the radio station, almost any mid-80s Fall song would be a realiably-beated respite for 5-6 minutes. This Sonic Youth mixtape is what the dr. ordered. I'm taking back the other Sam Shepard book I checked out and getting a Joe Brainard one instead. Yep. Bout that time.
Posted by Alex V Cook at 1/21/2011 04:08:00 PM