The Field - Yesterday and Today (listen) I like my techno like sushi, clean and unadorned. OK that is not true about sushi; I like a crazy jumbo 10-ingredient sushi parade, like the Rainbow Roll (bottom right) I once enjoyed with my friend George at Kyoto in New Orleans. Photo from the excellent NOLA food blog Blackened Out. 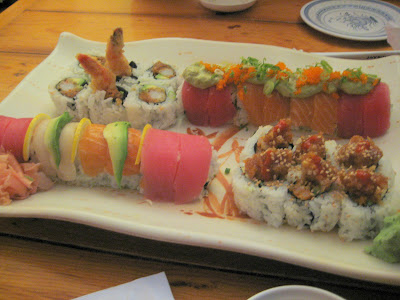 but I like my techno like how I think one is supposed to like one's sushi, a sensation that saturates you with One Clean Thing, pushing out all else. For something so supposedly machine-y, it is really one of the more viscerally-enjoyed musics around.

The More That I Do - The Field
Ólafur Arnalds - Variations of Static (listen) Icelanders seem to have a handle on successfully mixing the classical and the indie/electronic without making it cloying or turning it the least bit Andrew Lloyd Webber. He's got an interesting-sounding thing called "Found Songs" going on with his Twitter account, that, should you not be one of the curiously Twitter-intolerant, you might want to check out. Meanwhile, this quiet little record is just gorgeous.

Haust - Ólafur Arnalds
Incidentally, I accidentally had his Myspace page going while this song played below, and the layers got all the more intoxicating, especially when I couldn't figure out why it wouldn't rewind back to the beginning. There is your found song right there!

Kiasmos/Rival Consoles - 65/Milo (listen) Something from the more dancefloor side of the Erased Tapes label on which Mr. Arnalds' album can be found. Or maybe they don't have sides to things at Erased Tapes and that's why it all works so well. I will say having the Erased Tapes site up and playing at the same time as this was less a mellifluous finding.