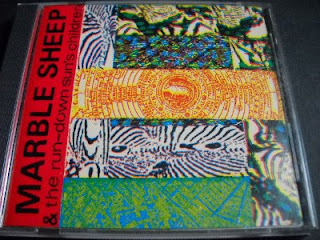 Marble Sheep - The Run-Down Sun's Children/Big Deal (from MUTANT SOUNDS) Japanese pastoral psychedelic jam soft-rock from the early 90's via another essential music blog. It reminds me of Dean Wareham's Velveteen guitar workouts on the Luna records (which sound like Sterling Morrison's from VU), except untethered from perfect pop shells to contain it. I don't know if that makes a guitar solo better or worse; many profess to not being able to stand a guitar solo unto itself, that it is the height of egergious indulgence. I think deciding that the output of another is egregious indulgence is in fact the most egregious of indulgences. You can just not like something, ya know... or in the case of this, you can like it a lot. More info about Marble Sheep can be found here.

Dream Syndicate - Live at KPFK Studio Z 09.05.1982 (Los Angeles, CA) (from Wolfgang's Vault) I like that Wolfgang's Vault is starting to slowly migrate with the times, even if the tow rope is about twenty years long. There was a 60s-esque "this is our music" zeal in the alternative 80's that deserves some exploitation. It will never overtake 60s/70s classic rock nostalgia because the music was never that popular to begin with, but there are some great little bands like Dream Syndicate that deserve a spin now and again. This live recording finds them a little more menacing and jagged than I remember, and it frankly serves the songs well. Their performance reminds me of that tell-tale couplet in Pixies' "I've Been Tired"


Luna - Lunafied (listen) And this. It didn't really sound like this then, but this is how I forcibly remember it.