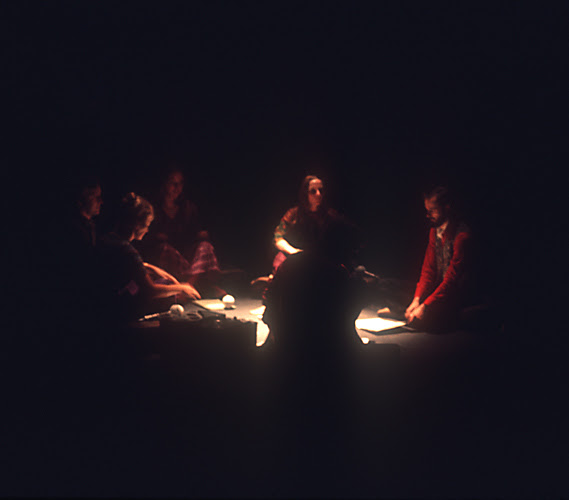 It has been ages since I did a "library haul" post, but I was having such a great library outing. I immediately spotted on the New Fiction shelf Wells Tower's new book of stories Everything Ravaged, Everything Burned that I've been really wanting to read (plus, what a name - Wells Tower... a story in itself) and found a two-DVD set of Stan Brakhage experimental films I'd never thought to look for there - as huge a Brakhage fan I am, I've only seen most of these on YouTube and sharp detail is the key with Brakhage. These three CD's caught my eye on the way out the door.

Ned Rorem - Hearing - I really want to like Ned Rorem; the idea of high parlor art, songs of simple form but high mindedness sung for appreciative listeners is better than the reality for this listener. I should just accept that I am a brute and move on.

Brian Auger's Oblivion Express - s/t - Especially since putting on this most arch disc of hard rock/prog/fusion gave me that "Now that's more like it!" feeling. I popped this on for the ride from the library to the pool and wished I was in enough to put this on the pool sound system. This kind of overblown excess rock is exactly what I want to hear echoing over the lukewarm chlorine expanse. I wanna see a line of little kids in goggles do infinite cannonballs during the knucklehead guitar riffs, earnest dad's swim another lap against the vaguely sinister organ.

Karlheinz Stockhausen - Stimmung (Copenhagen version) - Stockhausen is a composer whose biography I know better than his music. Most CD's of his work i've come across focus on his piano pieces, which are, well, nice modern-y piano pieces but nothing over which I get too fired up. Now this, a veritable seance of slowly unfolding vocal overtones (more details), is a different thing altogether. So human and yet so supernatural, an at-once pragmatic and metaphysical solution for a basic question of art: what can we do now? We can do things like this.
Posted by Alex V Cook at 7/14/2009 09:47:00 PM