so much older then 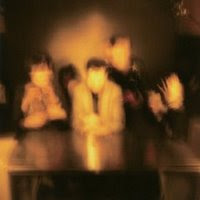 The Dead C. - Secret Earth (listen) I had a good trancey-space-rock Pandora station going this weekend that started with Bardo Pond but veered into safer territory. Now I wish I could string a net between Bardo Pond and The Dead C. and marvel at whatever beautiful, hideous monsters get therein snared. Be warned, the abrupt feedback opening the third track "Plains" will destroy your eardrums, as all proper applications of art-punk should.

And the slow burn of "Waves" is like watching the spark travel down a very long fuse, taking way longer than you expected to get to the dynamite you planted under your house, giving you time to reflect on the actions you have set in motion as well as the actions that took place inside that place about to be destroyed by those actions
Plains - The Dead C
The Horrors - Primary Colors (listen on MySpace) Coming out on 4/21 digitally, 5/4 on wax cylinder or on whatever scratched flat surface the rest of you people listen to music, The new album by The Horrors has my fullest endorsement. The press release says "Krautrock-influenced" and I say, "OK maybe..." with my mouth, but my heart rapturously bellowed "YES! THE CHAMELEONS UK! BUT MEANER! C'MON! YEAH!" to the unsuspecting people on the sidewalk next to me once the rockish 2nd track kicked in. Finally, with this and The Veils, 80's retro has finally gotten the message that it should pick the good music from the 80's to retro-ize. Everything about this record is spot-on and modernity-enhanced: the funkless funk, the insouciance, the heaven-ward pleas, the laser pointed to the farthest tangent on the horizon, the stilted drama unfolding and re-packing itself. Everything.

Also, nice touch on the embeddable press release video thingy. "Sea Within a Sea" is not even the best song on there and it still excites me ever so.


Colossal Yes - Charlemagne's Big Thaw (listen) Colossal Yes indeed! This is the best day of music discovery in my life. Is this what your forties are like? I would have gotten older a lot sooner had I known. This stuff is Yo La Tengo meets Ben Folds meets Paul McCartney meets the goddamn best song in the world right now!
The Fraudulent Singer - Coloss...
Posted by Alex V Cook at 3/30/2009 01:49:00 PM