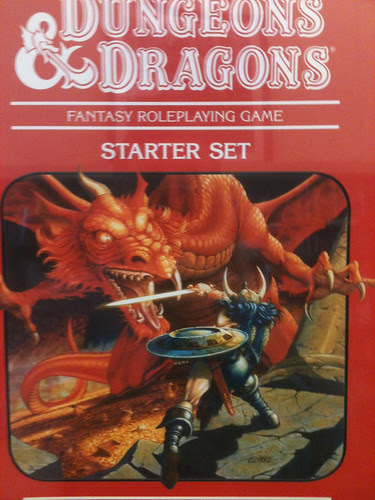 Our next family adventure awaits!

Regarding D&D, we are looking to channel the collective World of Warcrafting into something new and when they deposited me in the D&D section of Books-a-Million to see what we need to get started a flood of muscle memory took over. I was shaken out of my haze with a text "you still looking at d&d stuff?" I was! Just like Tom Hanks in that Mazes and Monsters movie that my mom had me watch when I first got infected. I wanted to intone to her one night "I am Pardue, and I am a holy man." like Tom Hanks did right before doing the terrible things the game made him do, but I suspected she woudln't have found it funny.


So yeah, I was a D&D NERD for a few salient years in Jr. high. The beginning set from way back when, the one that came with "The Keep on the Borderlands" module,  had the same exact cover, like Gary Gygax must've had a trillion boxes printed back then, but it's kind of a different game now. There were cards and game pieces and a big map to lay out and show to the other players, to which I call bullshit! Get out your graph paper and try to remember where those goddamn orcs are and which way West is again and roll a d12 already. Maya immediately took to the dice before even knowing anything about anything.

One thing that is interesting: Maya wanted to be a chaotic evil female dwarf fighter named Hamburger and my autoresponse was "There are no female dwarves!" before realizing how messed up that is. I distinctly remember something from my old Player's Handbook that female dwarves were rarely seen outside of the mines in which they kept their homes. The Reagan years in action. Maybe it was never an issue because there were no female D&D players around to protest.