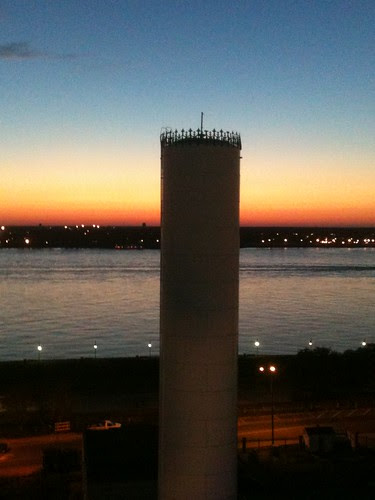 I'm still knocked out by the sunset yesterday.

Last night I was overcome with a need for the Dan and my bus being late allowed me a full hour of smooth-edged cocaine molestation cynicism. I suppose some similar need is pushing Band on the Run on me this morning. I managed to cut it off before it added Supertramp or Alan Parsons Project to the listening queue of the damned. I used to infamously hate Steely Dan to my core, and used that experience as a means to exmaine things for what they are and change the nature of my criticality. It is one of those many bar-napkin book ideas I've had, even made a little start at when Carl Wilson wrote his book about Celine Dion and trumped it. I haven't read the Wilson book so I need to see if we are beating the same dead horse, but it gave me an appreciation for teh previously unappreciable. Now I love-hate them.

Actually I blame Garth Marenghi aka Matt Berry and his almost-a-joke album Witchhazel, more of a flattened joke reinflated by wonder. It's the undisputed album of the week if there needs to be one. I blame Alan Lomax for making me think I had something to say about music and its implications.