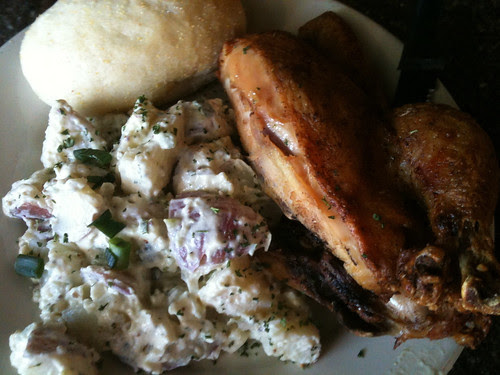 A dramatically lit shot of the baked chicken special at the Chimes from yesterday. The chicken expresses the common nature among all sentient beings as hunks of meat; the potato salad, the encroachment of society; and the roll, the Glowing Orb of the Unknown.

Despite all this post-Armageddon, garbage-cult-summoning-their-whale-god music might imply, I'm in a really good mood today! This appearance of Neubauteneer Blixa Bargeld making squid ink pasta on a German cooking show spurred all this racket on.


Einstürzende Neubauten, "Styropor". Back in my college radio days, I was fond of dropping this tune into my afternoon DJ sets. People loved when I did stuff like that. They were all, "Thank you for opening my ears!" Like all the time! I had to stop because it became too much pressure, opening everyones ears all the time.

Oswald Tschirtner "Eine Kleine... (In One Small Town, a Philosopher Says the Character of Mankind is God Given)", 1996

Oswald Tschirtner (AKA Patient O.T.) entered an Austrian mental hospital in 1947 after suffering mental disturbences stemming from having been a French prisoner-of-war during WWII. From the website:

Through the encouragement of the founder of the Gugging house of artists, Dr. Leo Navratil, Tschirtner began making elongated figures he called Kopffussler or “Headfooters.” These creatures with arms and legs that are the same length, are not original to Tschirtner and can be found elsewhere, yet he presented them in inventive ways that have evolved into other minimal forms of figuration. At the suggestion of Navratil, the artist also did his own idiosyncratic versions of photographs or paintings he was shown. He rarely initiates any drawing, but will produce works upon request; on the other hand, one is never sure how or to what degree the end result will conform to the original request.

From 1981 to his death in 2007, Tschirtner had been a member of The Artists House at Gugging, the realization of Navaril’s dream of bringing together artistically active patients to offer them better living conditions and more opportunities to create. At Gugging, he led a quite and orderly life there, working crossword puzzles, and getting on well with his fellow artist residents.

Tschirtner’s work is included in the Collection de l’Art Brut (Jean Dubuffet’s personal collection), Tschirtner’s work was also part of an exhibition called “War and Peace” at the American Visionary Art Museum in Baltimore, Maryland as well as the exhibition “ABCD: a Collection of Art Brut” at the American Museum of Folk Art in New York and the Chicago Cultural Center in Chicago.

Xenakis is a badass among twentieth-century composers, infusing his pieces with impenterable mathematics and architecture and who knows what else and yet, retaining the psychologically stimulating aspects of the atonalists.

He was a badass in other fields as well, like he lost an eye during a street battle with a British tank during the post-Axis British occupation of Greece in 1944

I don't know anything about glitch artist Alva Noto but I think that's the point of glitch maybe. The cover for Mimikry caught my attention.


And now it's raining outside my window. Have a good one!

Edited to add: UTP_ by Alva Noto was for a moment on Friday afternoon, the best music I've ever heard. I wanted to stand in one place and face the sundown and listen to this until it became completely dark