It's right around now that I start finalizing the top ten rock list, and I've got a healthy 12-15 that will get cut down make for a solid 10, but just to push against the walls of my treehouse to see of they'll stand, I'll hit up some other contenders one more time.

Ne-Yo - Year of the Gentleman (lala) I want a straight up R&B album to knock me on on my indie/metal/white-people-music snob ass and I suspected Year of the Gentleman would be the one. It is solid as a rock, Michael and Stevie-licious, even taps into some New Edition booty-chorus-lock that is in the DNA of any person that came up in teh 80s, but the album doesn't rise above that. Four songs in, and I think they are all one long song, and If I'm gonna go there, I'll take the off-kilter genius of R. Kelly over this.

TV on the Radio - Dear Science (lala) I do not get the massive appeal of this band. I've listened to all the records, seen them live twice and it is lost on me. It is not bad music by any stretch, but its not changing my life. Now that I'm giving it another listen, I do like that funky "Crying" song though. A lot actually. Hmmm. There are songs I have to hit next on, though, which is a deal killer for me.

The Fall - Imperial Wax Solvent (lala) I will continue listening to The Fall because they will always be interesting, and they embody a lot of things that I think are unfortunately on the wane, but this is a first of my many decades with this band where they did a "good" record (they go in cycles of: scrappy album with new band, good album with band, maddening mess as band dissolves) that I didn't obsess over. Still the greatest band ever, but they just don't make the greatest records anymore.

Clinic - Do It! (myspace) OH! I forgot about this one! I love this scrappy little weirdo of a record! Their live show was right up with The Fleshtones as the best rock show all year. Garage rock that doesn't sound like the garage or rock either. Clinic is back in the running. If the Fall had made this exact record, it would be at the top of my list, which reveals my lack of objectivity in these matters and is unfair to both bands, but that's how it goes sometimes.

But for now, someone dug up the very Hold Steady show I witnessed back in August. Click on the flyer and bask with me! 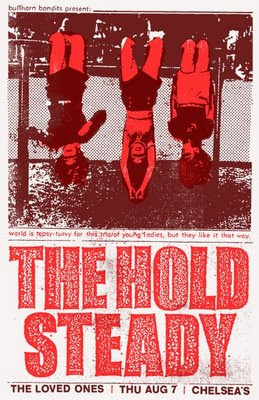