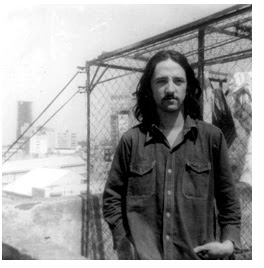 I get excited by the most obvious things when they are unexpected – an unexpected brush against flesh, an unexpected confrontation that becomes a rapid boil, an unexpected glimpse into someone’s dark interior, an unexpected sudden new arrival in whom I can admire obsessively in my own dark interior, and I have that in Roberto Bolaño, in his delirious obsessions with the poets he wants to become, his lurid sex contests in Mexico City bars, in his murders and hermits and freaks and heroes that populate his words. He is unafraid to be the unabashed fan and that made me one.

Email ThisBlogThis!Share to TwitterShare to FacebookShare to Pinterest
Labels: 100 words