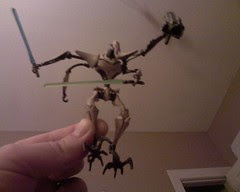 The Boba Fett I had at seven (you had to send in proof of purchases to get it) is no match for the nightmare coolness that is my seven-year-old daughter's General Grievous from Wal-Mart. We just had some hilarious lightsabre fights in her room that involved the battle droid getting his ass handed to him (literally - it detaches) and smack talk - what has two lightsabres and kicks your butt? THIS GUY. Despite the advancements in action-figure technology, I can still feel the gnawed plastic foot of Luke Skywalker on my teeth. Such are the ways of The Force. 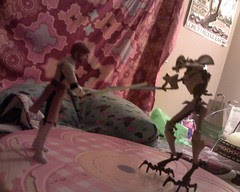 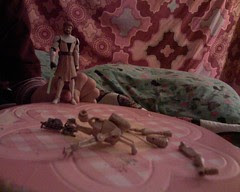 Email ThisBlogThis!Share to TwitterShare to FacebookShare to Pinterest
Labels: 100 words