[outsideleft] Yo Saturnalia and Happy "Christmas" from The Singing Saws

Nothing can cut through your holiday blues quicker than a singing saw.

I am not a direct advocate of Christmas proper, but have come to fully embrace “Christmas.” Like many, I found myself bummed to my rotten core at this most festive season, that people in cheery green and red sweater combinations with matching scarves, mirthfully sipping hot chocolate in your face would inspire seething rage in me. My mood would tunnel into the metaphoric snow –I live in the South and are thus robbed of Christmas’ postcard veneer – until spring would arouse it with the sensual fragrance of new life. Christmas was a miserable time.

So at some point, I pushed Christmas aside, acknowledging my incompatibilities with it and the unstoppable inertia of its approach and embraced “Christmas,” a less-formal appreciation of humankinds’ best and worst behaviors compressed into a season. I think not of poor baby Jesus freezing in the barn as sheepherders bring him, what… incense? No amount of Nag Champa is going to hide the circumstances there. I think of Saturnalia, the bloody, sensuous feast of Saturn, a badass among the Roman gods who attained power by castrating his father Ouranos with his trademark sickle. His feast is marked with a week of gambling and orgies, sweaty times where 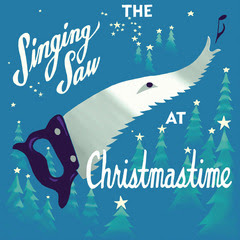 slave and master often changed places and greeted one another with “Io Saturnalia”; io being pronounced as a jaunty yo! Who needs Burl Ives and Bing Crosby of Christmas when you have the bloody sickle of Saturn and the exploits of Caligula to celebrate?

But my days of wine and blood rituals are long past me, so I keep a tinge of it as I celebrate “Christmas.” I even acquiesced to my boss’ desire to decorate the office for the season; the festooning of the clock in the above photo is my handiwork. And, I can think of no better music to accompany this perversion-yet-adherence to holiday dicta than that of Julian Koster and his Singing Saw Orchestra. The former saw-man of Neutral Milk Hotel and member of The Music Tapes has done a simple thing on The Singing Saws at Christmastime – arranged the old standbys to his lonely instrument. On this album, “O’ Holy Night” becomes the plaintive supplication of a wolf, whimpering in the cold to the moon. “Jingle Bells” is the winds, joining in on a melodious and celestial mew of quiet joy.

Singing saw – an actual handsaw bent and played with a bow – is not what you’d call a versatile instrument, but its haunting voice, more ghostly than even a Theremin is unmistakably effective at drawing you in. Koster does manage to shake things up on “Hark! The Herald Angels Sing” – literally; it sounds like chains and wind chimes are clattering in the breeze, but the wonderful hum of the saw still holds center stage. This fits my “Christmas” to a tee, combining detachment and engagement with the same fervor. I am tempted, when my festooned clock in the hall proclaims it time to pack up for the winter break, to set The Singing Saws at Christmastime on repeat, just loud enough to seep under my locked door so that it may fill the abandoned halls with “Christmas” cheer. Io Saturnalia! Happy “Christmas”! And to all a good night.

Listen to it on lala.

Email ThisBlogThis!Share to TwitterShare to FacebookShare to Pinterest
Labels: outsideleft