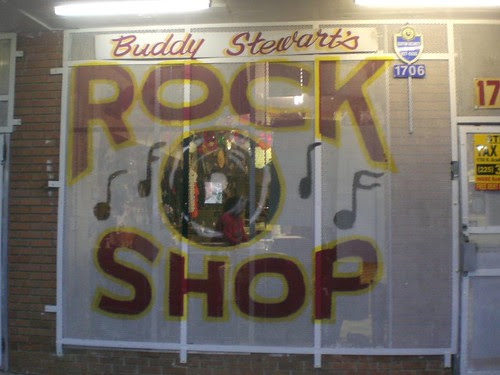 In the January 2009 issue of Country Roads

Buddy Stewart's Rock Shop
Researching the history of the blues is a little less lonesome.

The way I generally describe my relationship with music is this: I am on a train going in one direction, looking out the window, where other trains are going in their directions, blurring past. At one moment, for some reason, I make eye contact with someone on one of those other trains, and that brief second is an eternity. I can see their face distinctly, can read their mood in that instant, and it lingers long after that instant is passed.

I had this experience about a month ago while listening to Zia’s weekend blues program on KLSU. In his silky smooth radio voice, he intoned the name “Lonesome Sundown” followed by a spectral boogie run that sounded like it was coming from inside a canyon. Sundown’s canyon was a reverb tank at the Excello records studio in Nashville. Excello put the shudder of reverb onto the blues with Slim Harpo’s “I’m a King Bee.” You hear plenty about Harpo around these parts, likely because of his being covered on the first album by a blues-infatuated British group named The Rolling Stones and because every old blues cat still scratching around these parts either knew him or played with him. Lonesome Sundown, though, is a bit of a mystery.

The first time I encountered that name was on a visit to Buddy Stewart’s Rock Shop on Acadian Thruway in Baton Rouge, in a framed promo shot on the wall of the adjacent Rhythm Museum. With the shaky state of record stores residing on the beaten path, I was afraid for the fate of Buddy Stewart’s, a loosely-kept secret for blues collectors since 1980. My fears were allayed once I passed through that beautiful record-album mural painted over the door, there was Buddy’s daughter Philiper Stewart on the phone, waving me in. The shop has weathered the hard times rather spectacularly: the racks of 45s are on neat shelves along the walls, the ceiling explodes with dangling memorabilia.

As you might guess, I love old record stores. If I make it to heaven, I expect there to be, right next to the coffee shop, a cavernous dusty room filled with racks of albums, gleaming glossy cardboard portraits waiting to be picked up and examined for the information on the back. While Philiper was finishing up her call, I fell into the natural pose in which much of my college years were spent: fingers out, flipping through albums. Flap, flap, flap flap…I love that sound almost as much as the music on them. Philiper breaks me from my trance “Looks different than last time you were here, doesn’t it?”

Philiper explains that the Rock Shop has had to make some adjustments to their business model to stay afloat and are in the process of becoming the Buddy Stewart Music Library. “We find that more people walking in the door are more interested in researching the history than purchasing the records. Some still do purchase records, and we appreciate when they come through, but we can’t rely on that business to keep the doors open.” To keep the lights on, two cubicles off to one side of the room house a seasonal tax preparer’s office, Philiper’s son Dell runs a barber shop next door, and the Rhythm Museum is rented out for parties.

The library operates similarly to reference stacks, not lending out materials, but allowing the curious to come through and record things to take back with them. While flipping through the stacks of records, the loose story of Baton Rouge blues starts to come together. Buddy Stewart was a saxophonist and big band leader in the fifties and sixties taking his Top Notches around the south and leading the Herculoids, a backup band for performers like Solomon Burke and Jackie Wilson when they came through in the 1960s and 1970s. Stewart wrote regional hits with Chuck Mitchell (“Your Precious Love”) and Gene Fairchild (“Another Shoulder to Cry On”) as well as “If I Ever” with vocalist Lee Tillman under his own name on the Ron label. Stewart opened his record shop on 33rd street (before it was called Acadian), which in the sixties was the blues avenue in Baton Rouge. “Everywhere you see a church up on this street, there was a juke joint or a nightclub,” says Philiper who took over the business in 1997 and has maintained her father’s legacy and kept Baton Rouge history alive ever since. Each October, the Museum hosts its annual Rocktoberfest, last year upgraded to two stages, featuring the finest blues, R&B, and Zydeco. She is hoping to be able to start up the Monday night jam sessions at the Museum again, once she can find musicians to commit to it and volunteers to help run it. Philiper talked briefly about funding problems, but her one concern is keeping the doors open and the history alive. “I would love the museum next door to really become that, a permanent museum where people can come relive this music and see where we came from.”

I got around to asking her about Lonesome Sundown. “I am not positive, but I’m pretty sure his name was Cornelius Green. I do know it is Green because one day a Mrs. Green came in and told me she was his wife. I didn’t know him personally, but I remember him being around the scene.” The phone rang again, so I thumbed through the blues stacks and came across Lonesome’s 1970 self-titled record for Excello, which opens with his 1960 hit “Love Me Now” and handed it over to Philiper to make a CD copy for me. I still don’t know the whole Lonesome Sundown story, but the important thing is that there is still a place to go look for it.