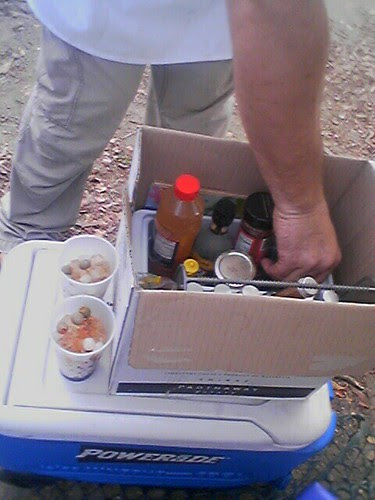 requires a well-appointed Bloody Mary kit like that my friend John hauled out during tailgating yesterday. My friend Terry said you have to get a nun to stick her middle finger in it to make it complete, but no obvious nuns were available.

The best drink I've ever experienced in the Bloody Mary family came about when my friend George and I rode our bikes down to the recently defunct Thirsty Tiger one impossibly hot Saturday afternoon to get Jeff the World's Greatest Bartender (somehow your tab at the end of the night would be "oh...let's call it six bucks"and he once chased after a certain melodramatic, blind-drunk patron who was intent on jumping in the Mississippi after a really bad night and talked him down) to make a signature drink for George's band Twobanger.

We drank our way through a couple missteps until someone locked in on a tequila Bloody Mary with a shot each of green and red Tabasco, served in a martini glass with three cocktail onions on a plastic sword. It was the drink that ate like a meal, and looked delightfully perverse in the glass as you staggered around in thrift store suit jackets, scanning the room with wolf eyes. I don't think any of the actual band members took to it, but it was my favorite funny car fuel for about a year there.
Posted by Alex V Cook at 9/23/2007 02:37:00 PM