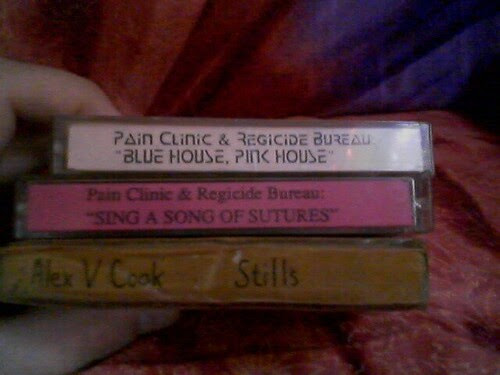 My friend and brilliant visual/sound artist Philip recently unearthed some cassettes of music that I made back in the early 90s, and sent them to me so I can have digital copies and possibly drop them onto myspace. I'm not exactly sure how many "albums" I recorded because at one point, a guy here in town that was running a small but enterprising experimental music cassette label expressed enthusiastic interest in releasing them, so I lent him all the master copies and subsequently he disappeared and in his infrequent re-emergences, he professes ignorance of their wearabouts.

Back then in the cassette culture underground, where we traded our homespun tapes on our homespun labels and built a pre-Internet network through fanzines like Factsheet Five and tons of trips to the post office, you had to have a name for your project, and frequently had different names for different facets of ones obscure output. I was riding somewhere with my girlfriend back then, and we saw a sign on a building for "Pain Clinic" and boom, I had an instant band name. Regicide Bureau was the name used by Tom Sutter, a rather sizable player in cassette culture back then. We had traded things for a while and then he informed me that his fiancee was speaking at a conference in New Orleans, and could they stay at my place, with hopes of collaborating. Music was a completely solitary activity then, so those two tapes contain the first time I ever played music with another person. I remember her angrily sleeping off the flu in my bed in the other room while Tom and I made racket in the other. (Randy - these were recorded in the apartment in which you currently reside)

I still think Pain Clinic is a great band name, but, while I don't actually remember the nature of the pieces on Stills, but I do remember considering them "more serious work" and worthy of not having to hide behind a pseudonym.

Just to show that the ironic gods have comedic timing, there was a second tape bearing my name after that called Shifts that was comprised of pieces based on Alvin Lucier's compositions. I used to have a copy of it in the glovebox of my old car, and remember taking it out when I traded it in, thinking "wow, thank goodness this didn't get lost" and then immediately tucked it away somewhere so it would be lost forever.