Noise is Just Like Music - They are Both Made of Sound 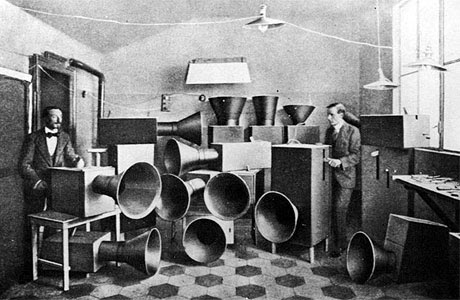 Francesca Gavin gave an exhibition of sound sculpture at the Tate Modern a ho-hum run through in The Guardian, dully complaining that there was little melody. It is not called "song sculpture" for a very specific reason; these artists are dealing with sound as a medium, not songs. Complaining that they don't sound like songs is like saying a porcelain figurine of a cat looks nothing whatsoever like a toilet, despite the fact that they are both made of porcelain.

She did however top it with that awesome picture of Italian futurist artist Luigi Russolo's
Intonarumori, a machine constructed in 1913 to flesh out some of his theories later published in his manifesto The Art of Noise. None of these contraptions survived the way, but recordings of them did, offered up generously by the fine people at ubu.com

As far as I know, no footage of Russolo's noise concerts exists, but here is a group of art students reenacting a noise concert on the YouTube (in 8 parts)