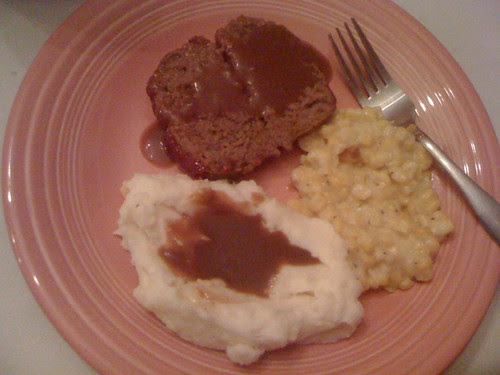 My dinner plate last night. I live like a king.


I have a soft spot for Cheap Trick. When I was in late grade school, they played a show at the Nicholls State football field (as did the Police) and everyone (but me) went. I don't harbor any real resentment about missing that, though my stepbrother evidently watched the Police from his apartment balcony and didn't think of calling, but whatev. My entire peer group was all about Cheap Trick Forever from fifth grade on.

I went to a wedding of one of my girl cousins once and she walked around the day before in a  Cheap Trick t-shirt. Her stock car racing husband-to-be said she was wearing that shirt when they met at a bar right near the track and he didn't know Cheap Trick was a band, and he said ... It was his favorite story that she took up with him anyway, which is corny and beautiful. Everything at their wedding was purple because his whole racing motif was purple and my aunt kept muttering the whole time "Purple! Makes me wanna erp." I want to say they played "I Want You to Want me" at the reception but I might be projecting that.

Maya's love of Sgt. Pepper is in lock repeat at our house and I'm tempted to slip Cheap Trick's corny and beautiful full-album remake into the mix but why mess with something so pure?

Girl Talk's All Day is a cassarole fulla 7-layer rap-white-people-like party dip, ten retro nites happening at once, a super fun-o-matic travesty of what we've become. It's synergy in action and possibly more fun than actual fun is. When you go, "That's from that Cyndi Lauper song!" what does that declaration really say?